Sharing a border with China to the north and Ha Giang Province to the west, Cao Bang (Cao Bằng) Province is best known for the Ban Gioc-Detian Waterfalls. Crossing a 300 meter (984 ft.) wide section of the Quay Son River, the natural border between Vietnam and China, towering karst limestone formations create the two massive waterfalls. At 30 meters (98 ft.) in height, these falls are considered to be the fourth largest to straddle an international border. The Famous falls are part of the Non Nuoc Cao Bang UNESCO Global Geopark. Covering an area of 3,000 km2, the park received USESCO status in November of 2018. 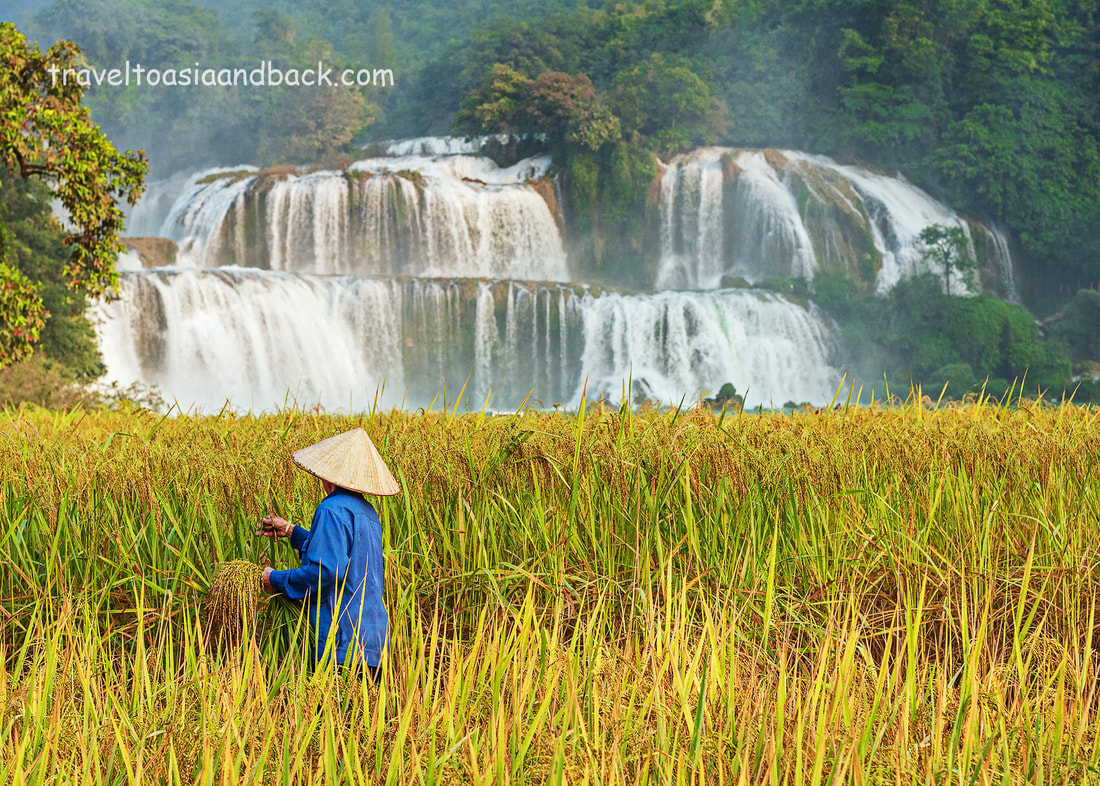 traveltoasiaandback.com - Harvesting sticky rice, Ban Gioc Waterfall, Cao Bang Province
Despite having this famous natural attraction, Cao Bang province sees relatively few western tourists. The majority of foreign visitors tend to travel as part of organized tours with cars and drivers or independently on motorcycles. Few solo budget travelers or backpackers venture to Cao Bang, possible due to the belief that the area is difficult to reach by public transportation or that there is nothing much to see besides the famous waterfalls.

For our part, we feel that Cao Bang is a greatly underrated destination. Travelers, who are looking to explore rural Northern Vietnam, view stunning landscapes, meet minority ethnic groups, visit local markets and get off the beaten path, should consider a visit to this remote province.

A journey through Cao Bang can also be easily combined with a tour of neighboring Ha Giang Province and the Dong Van Karst Plateau Geopark or Ba Be National Park in Bac Kan Province to visit Vietnam’s largest freshwater lake.

Cao Bang Province does not have an airport but can be easily reached by bus, car or motorcycle. Traveling by railway is not a particularly practical option as the nearest stations are in neighboring Lang Son Province and are well out of the way. Cao Bang City, located 277 kilometers (172 mi) from Hanoi, is the Province’s main transportation hub. The small, modern city is not a tourist destination itself; most visitors use the city as a base to reach the falls and other parts of the province.

Like many northern provincial capitals, Cao Bang City is well connected to Hanoi by van, mini-bus and full-sized motor coaches. Both day and night buses are available from My Dinh, Gia Lam and, Giap Bat stations. Travel times and prices vary considerably from one bus operator to another. Travelers can expect the trip to take a minimum of 6.5 hours and cost between 200,000 -300,000 VND.

It should be noted that vans and mini-buses can either be quite ordinary or “Limo /VIP / Express” type. Converting ordinary vans in “luxury” vehicles is all the rage in Vietnam and we can expect to see more routes opening up.

The Vexere bus booking website is an excellent resource for finding Vietnamese buses, but I suspect many buses, particularly  local mini-buses don’t make the list. One can also filter for bus type, price, etc. 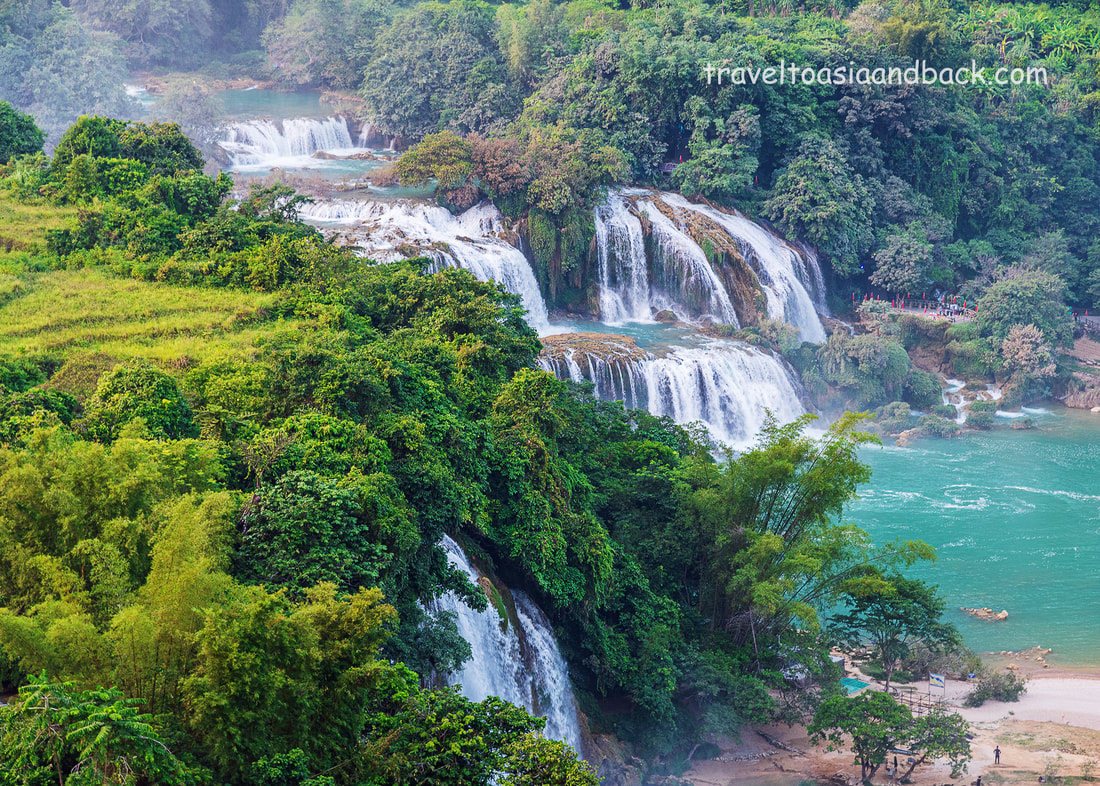 The province itself is remarkably well connected by local vans, mini-buses and the ubiquitous yellow and red-colored “public buses” found throughout Vietnam. One can easily and inexpensively reach fairly remote villages and frontier towns such as Bao Lac and Bao Lam. Travelers should bear in mind the bus travel in the northern provinces can be really slow and time-consuming. Mini-buses, which transport cargo in addition to passengers, often make many stops and the overall travel spend will average a very slow 40 kmh. 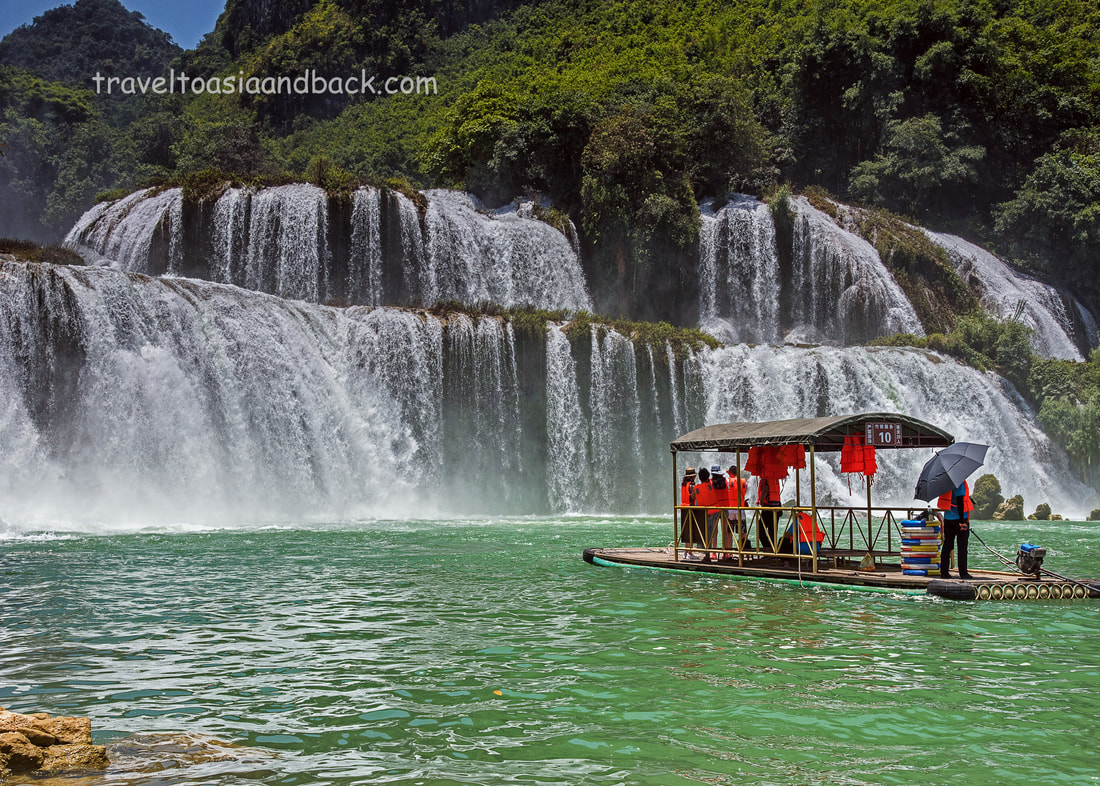 traveltoasiaandback.com - A tour boat from the Chinese side of Ban Gioc Waterfall, Cao Bang Province

The waterfall is most impressive during the rainy season, roughly late May through September, when the Quay Son River is at its highest water level and the falls are at maximum volume. September-October is an excellent time to visit, as it is basically the end of the rainy season when the locals harvest the golden rice fields.

Interestingly enough, the falls as an attraction, never really close. Our favorite time of day to visit is just after sunrise when few tourists or locals are about. Sunset is also a pleasant, quiet time to visit and take photographs.

Like many of Vietnam’s tourist attractions, the entrance fee, 40,000 VND, is unbelievably inexpensive. 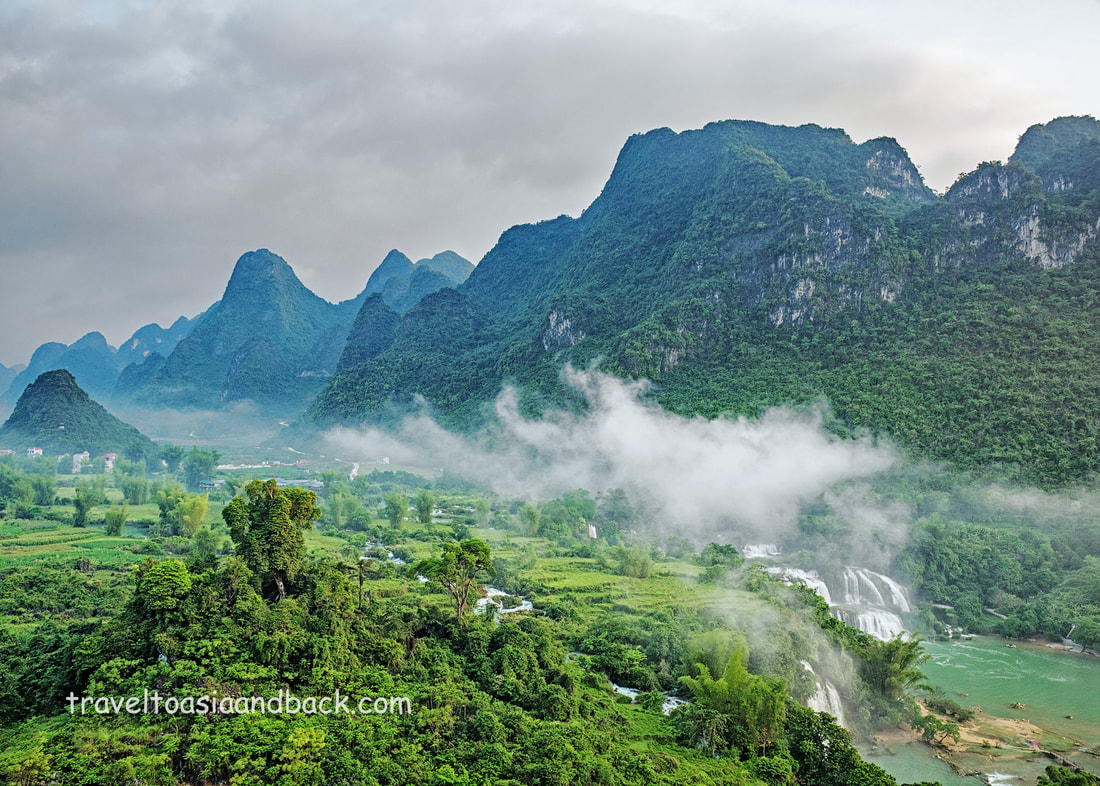 Things to do While Visiting Ban Gioc 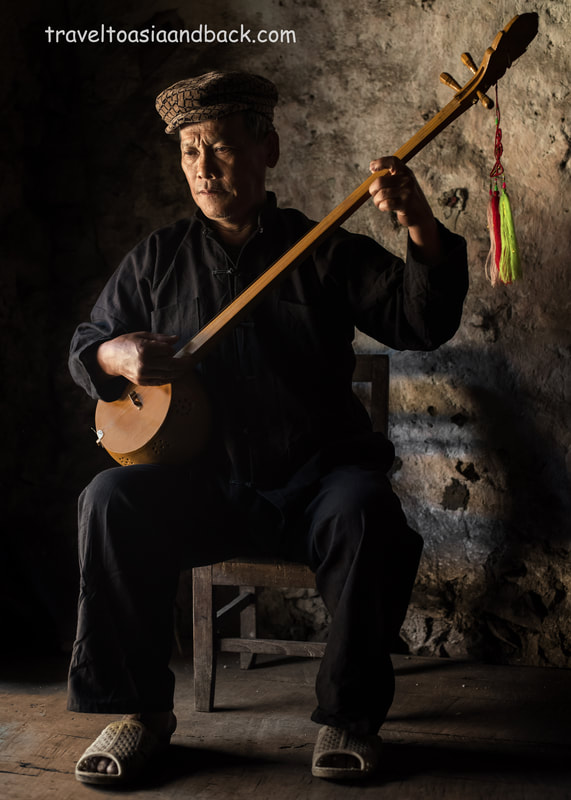 Khuoi Ky is a tiny village inhabited by friendly people from the Tay ethnic group. Primarily farmers, the Tay are well known for their skills as stonemasons and still practice a very traditional way of life. The village is particularly unique due to its architecture: stilt-house constructed of stones cut from local limestone.

A number of families offer inexpensive home-stay in the village. 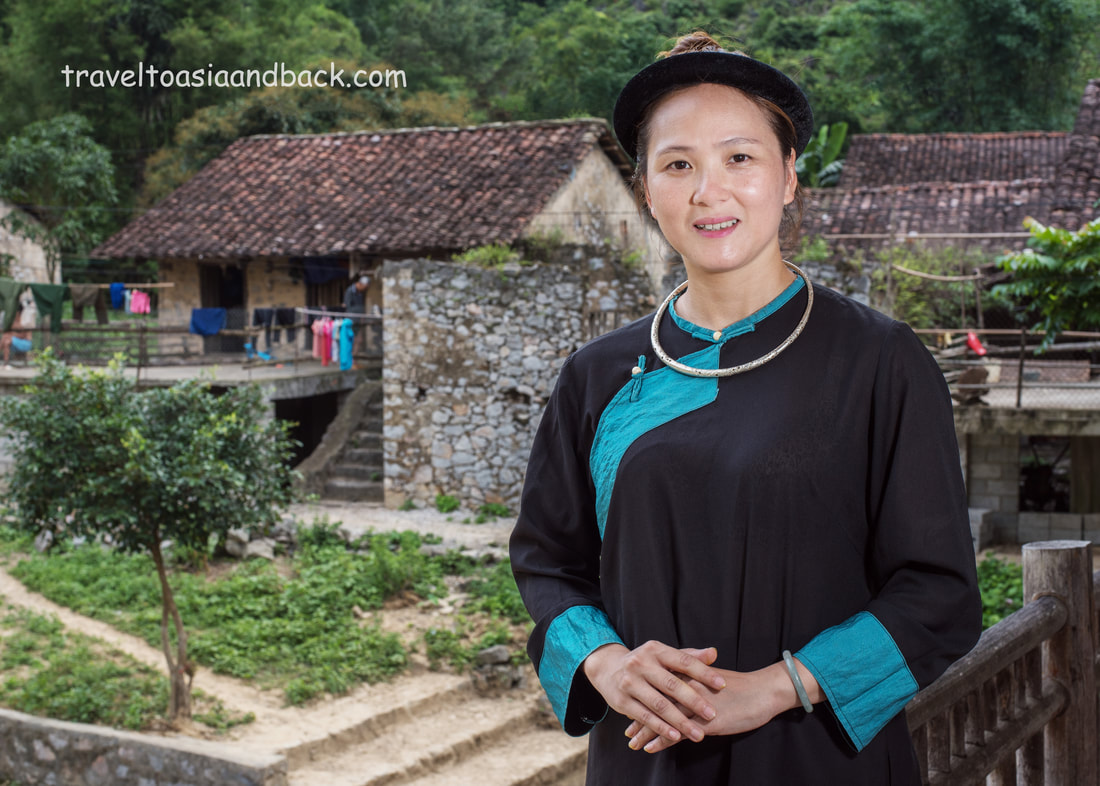 Located one kilometer south of Khuoi Ky, Nguom Ngao Cave (Tiger Cave, in the Tay language) was used by the locals as a shelter during the 1979 Chinese invasion. The cave was opened to tourists in 2006 and features a well-lit, paved trail that leads visitors on a one-kilometer route through the caverns. A stroll through the cave takes roughly 45 minutes. 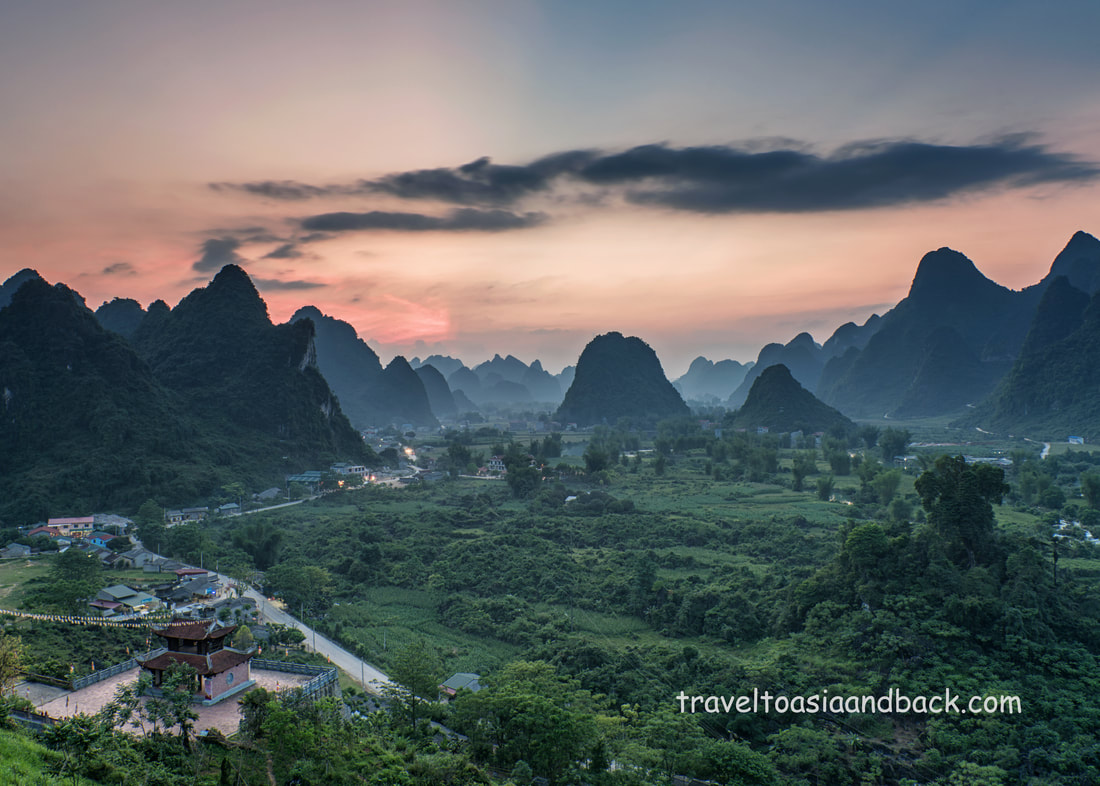 Perched on the side of Phia Nham Mountain, roughly 500 meters from the falls, this Buddhist Pagoda is well worth a visit. It is a great spot to view and photograph the falls and make sunset photos of the karst studded landscape. 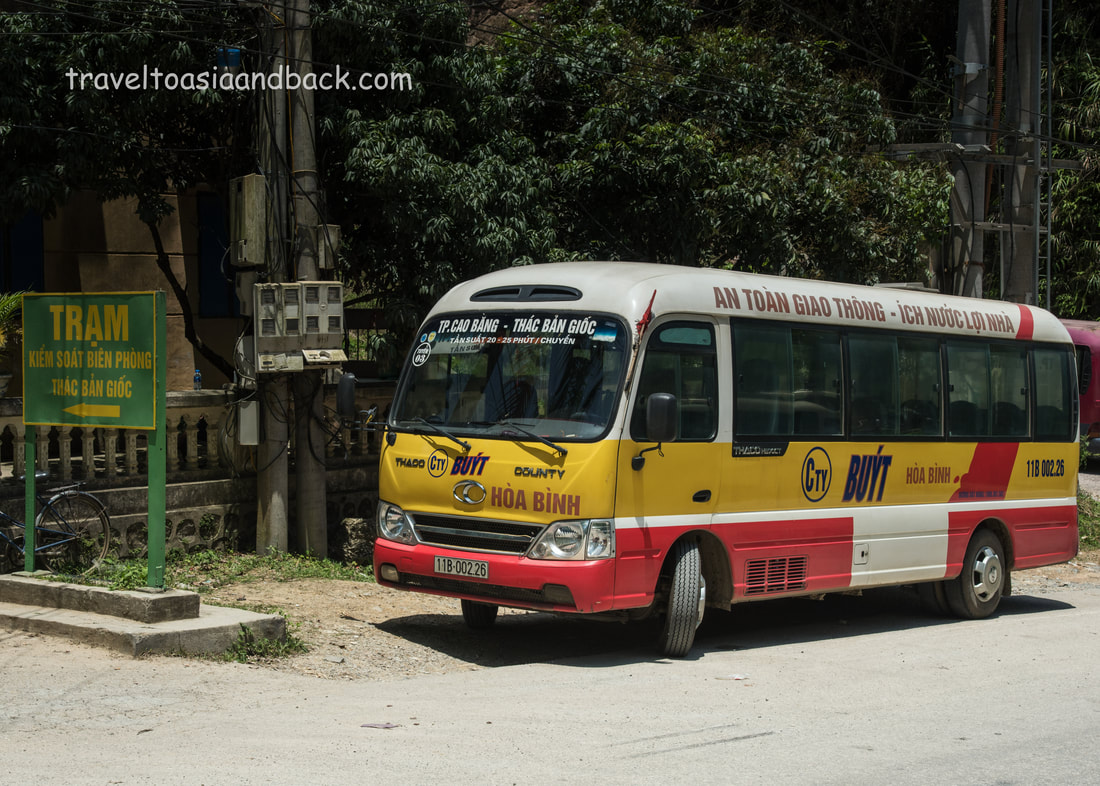 A common traveler’s route begins by taking a bus from Hanoi to Cao Bang City. From Cao Bang city visitors who are licensed and qualified may rent a motorcycle and enjoy the freedom to make a leisurely journey through the countryside to Ban Gioc. It is also possible to reach the falls by taxi or motorcycle taxi, locally know as xe ôm.

Budget travelers can do this route very inexpensively by utilizing the public bus. The number three mini-bus regularly runs back and forth between the city and the falls. The falls happen to be the last stop, making the trip easy and worry -free. Departing every 20-25 minutes the cost is just 60,000 VND and takes roughly two hours and thirty minutes. The last bus departs the fall at 4 PM (16:00). 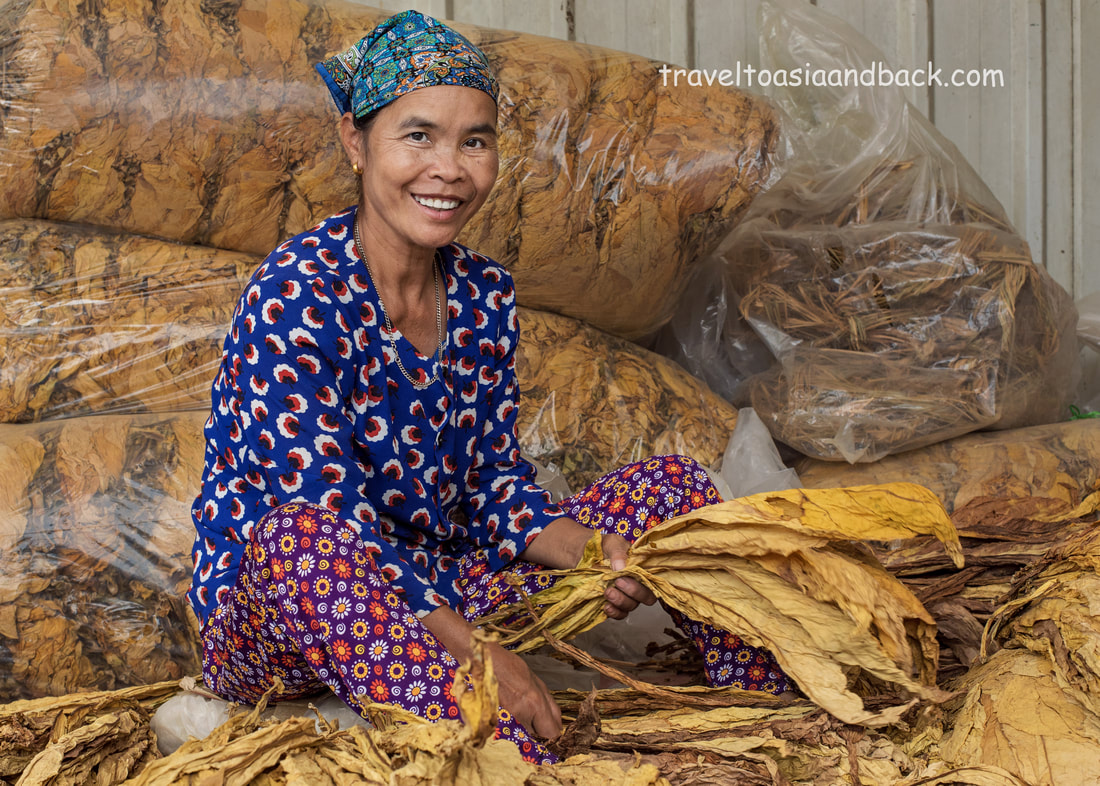 An alternative bus route that bypasses Cao Bang City and saves a fair bit of time involves taking a bus from Hanoi to Trung Khanh (Trùng Khánh) Town, the district capital. The town center is located 25 kilometers (15.5 mi) west of the falls. From Trung Khanh the journey is completed by utilizing the same number three public bus.

Trung Khanh holds a large and lively market in the town center on the 5th and 10th days of the lunar calendar. 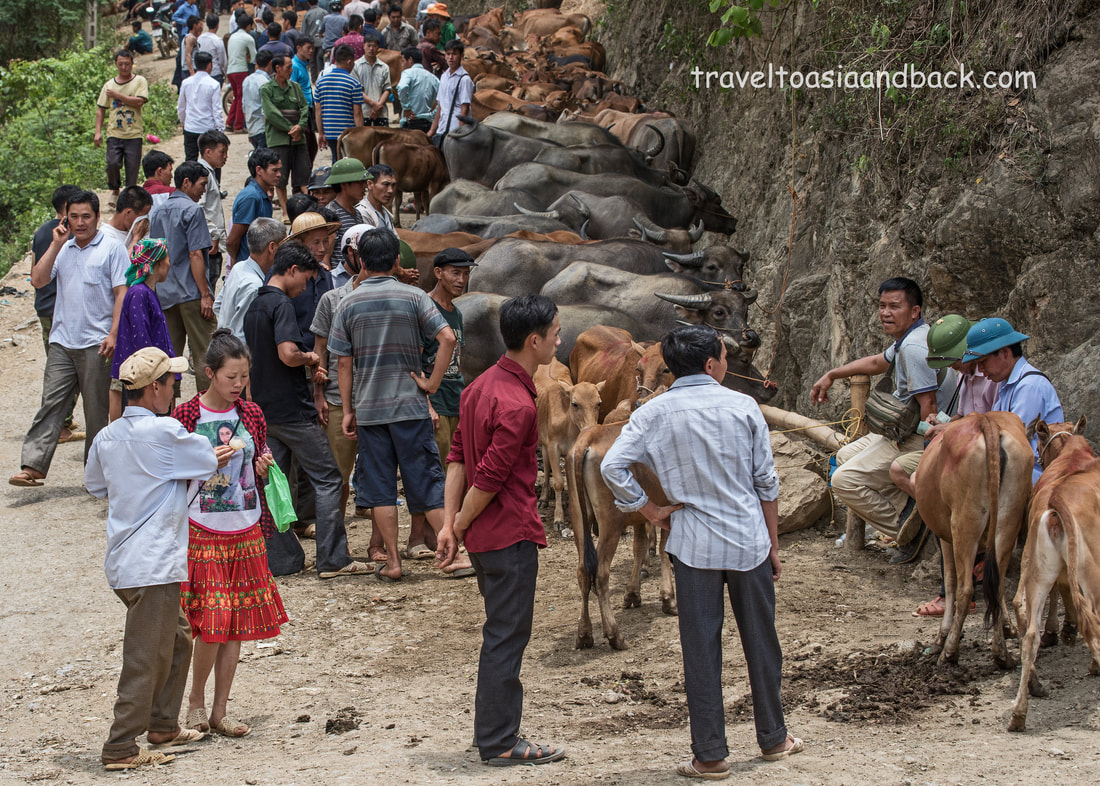 Colorful local markets are held virtually every day throughout the province. These markets offer visitors a glimpse into the daily lives of the Provinces minority ethnic groups which include the Dao, Hmong, Hoa, Lo Lo, Kinh, Nung, San Chi, and Tay. Each district, there are twelve, hosts a market twice a month. In addition to the big district markets, smaller administrative divisions also host similar bi-monthly markets. 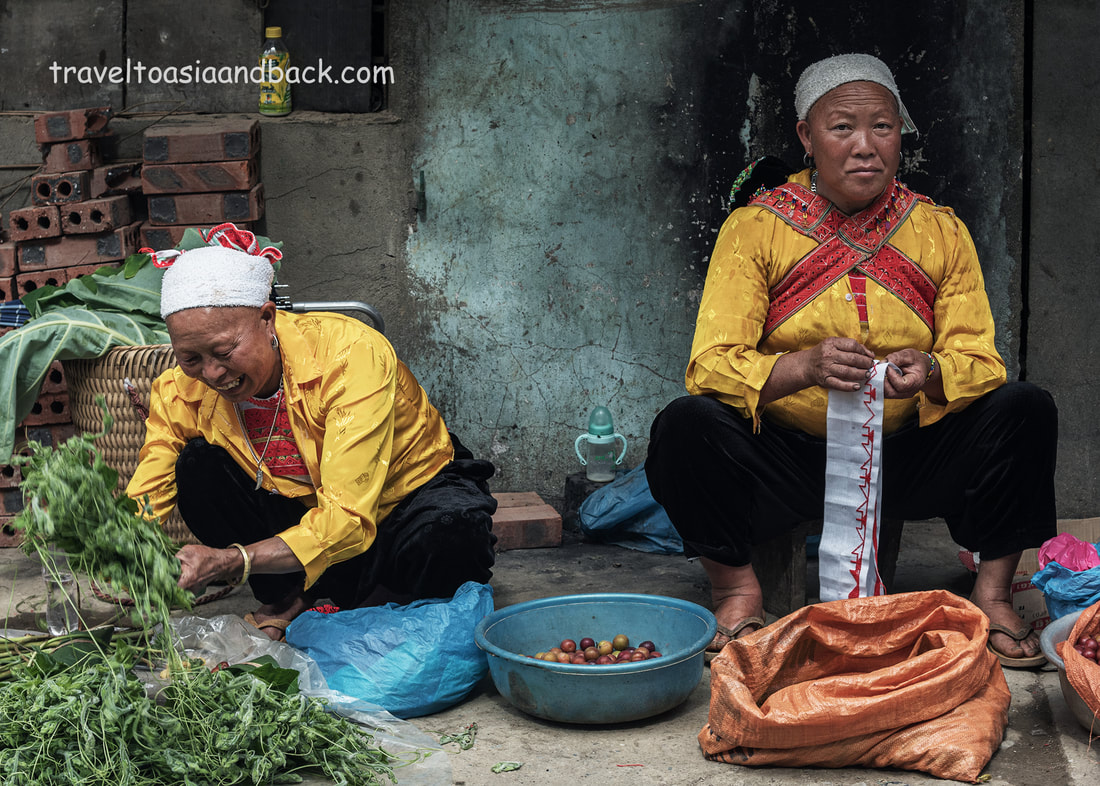 The small town of Bao Lac is the capital of Cao Bang Province’s western-most district of the same name. A frontier town of sorts, it is home to a number of minority people including the Black Lo Lo, Kinh, Nung, San Chi (who’s costume is very similar to that of some Red Dao groups), Tay, White Dao, and White Hmong.

Bao Lac is often a common stopover for travelers touring the region on organized tours with a car and driver or by motorcycle. It is a convenient and logical stop between eastern Ha Giang Province and Cao Bang City. However, few tourists spend more than a night or two which is a shame as the surrounding countryside truly is “off the well-beaten path”. 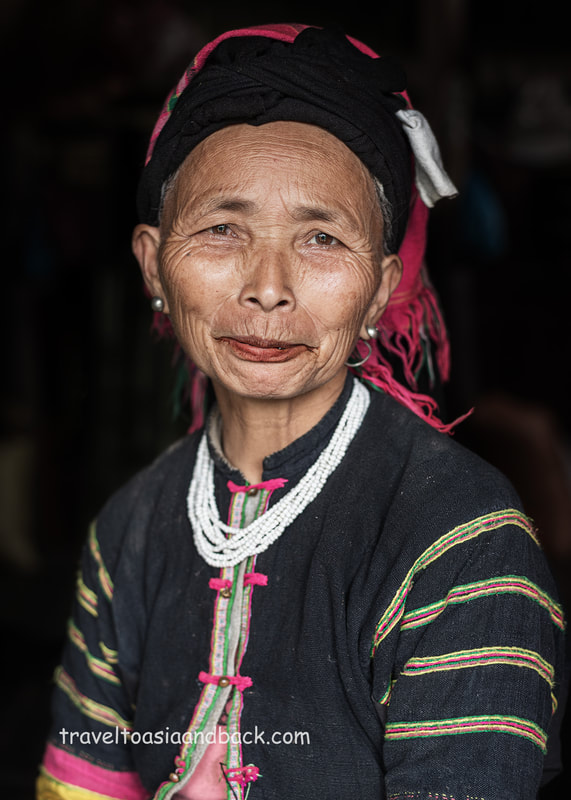 Although there is activity in Bao Lac’s central market every day, the big market days, the area’s best-known attraction, is held every five days as per the lunar calendar; the 5th, 10th, 15th, 20th, 25th, and the 30th days of the month.

​In our opinion, this is one of Northern Vietnam’s most interesting markets as it attracts a diverse mix of minority ethnic people in full traditional dress. It is also one of a handful of markets where large livestock; cows and water buffalo are still traded.

This year (2019) the buffalo market was moved to a new location on the east bank of the Gam (Gâm) River, 1.6 km north of town. The lively market is surrounded by small local style restaurants where folks gather to eat and drink after a busy day of trading. 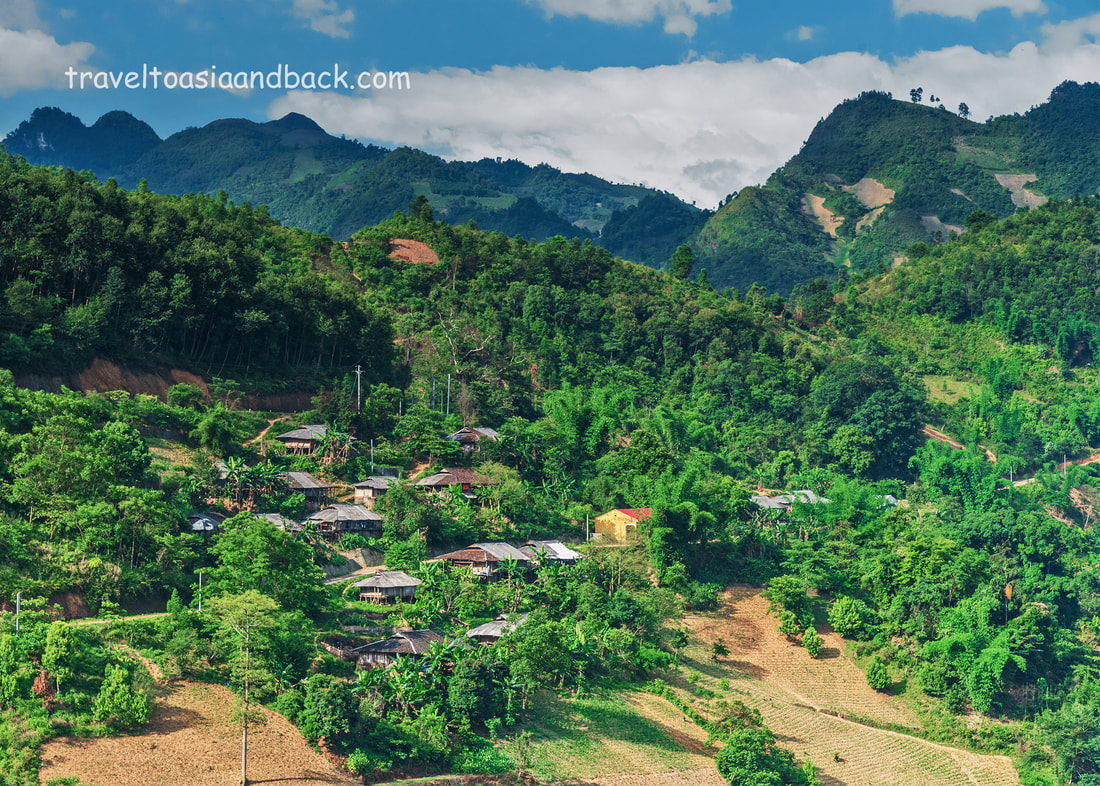 Many authentic and traditional minority ethnic villages can be reached from Bao Lac town. A few have been gently touched by tourism and are visited fairly regularly. Khuoi Khon (Khuổi Khon) home of the San Chi people is a good example. The village has a community-based tourism program that collects a small entrance fee (20,000 VND) and arranges homestay.

The Black Lo Lo Village of Na Van is also known to tourists and tour guides but can hardly be described as touristy. Ladies in these villages still take their traditional clothing very seriously and often have handmade pieces of clothing and embroidery for sale. However, you won’t find any souvenir stands or shops anywhere in the district.

If one has the time to venture further afield and travel up into the mountains over roads too steep, muddy and rutted for the average car, travelers can explore pristine countryside and villages that have seen very few foreign tourists. 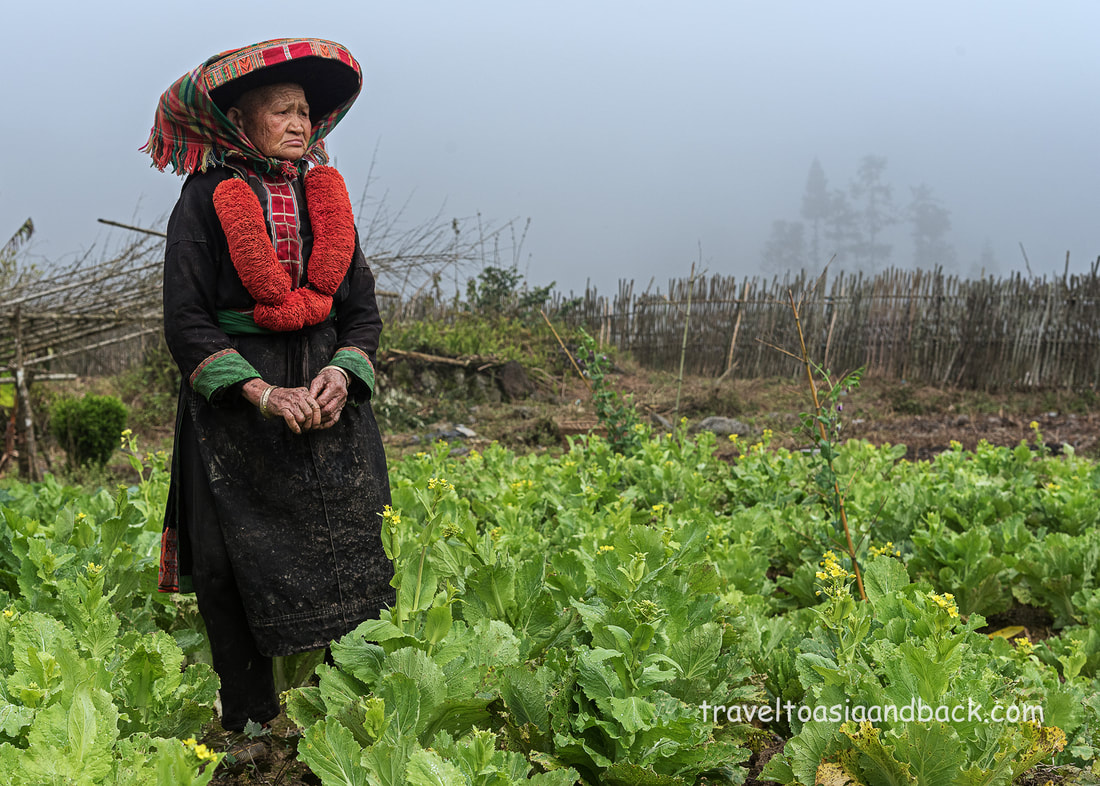 Situated on Highway QL 34 Bao Lac is often included on private hire-car and motorcycle tours that combine Ha Giang and Cao Bang Provinces. Bao Lac is a logical stopover between the frontier town of Meo Vac and Cao Bang City. The 80-kilometer (50 mi) journey can be completed in as little as two hours by car or three hours by motorcycle.

There are no buses running directly between Meo Vac and Bao Lac; independent budget travelers can travel between the districts by hire-car (taxi), motorcycle taxi (xe ôm), or by taking a bit of a detour through Bao Lam.

Cao Bang City, 103 kilometers (64 mi) to the east, is well connected to Bao Lac by mini-buses and a handful of full-sized motor coaches. Travel time is roughly five hours. 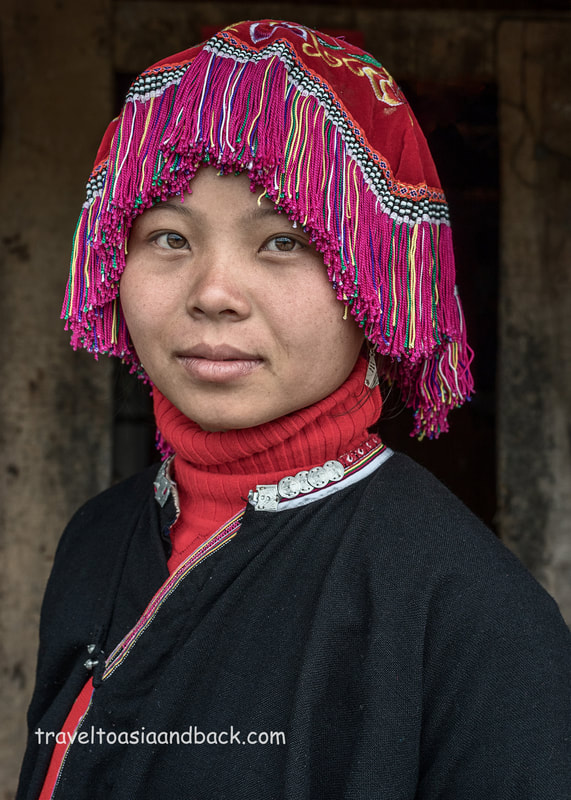 The small town of Bao Lam is a bit of a bus travel hub for independent travelers. Numerous mini-buses run between the town and Ha Giang City to the west and Bao Lac / Cao Bang City.

From Ha Giang City there are a number of mini-buses that are marked “Hà Giang -Bắc Mê”. Interestingly enough, these buses, after stopping in Bac Me, continue on to Bao Lam before returning to Ha Giang City.

Experienced motorcycle enthusiasts have the option of taking an interesting off-road route between Meo Vac and Bao Lac. Although Google Maps clearly shows a road overlay marked as DT-217, much of this route is nothing more than narrow dirt trails and can only be done by motorcycle.

The highlight of the journey is crossing the Nho Que River (Sông Nho Quế), the natural dividing line between Ha Giang and Cao Bang Provinces. “The Bamboo Ferry”, a simple but sturdy craft is powered by  local Hmong muscle power and is available upon request.