With a population of over two million people, Phnom Penh is Cambodia’s largest city and the nation’s capital. It became the Khmer’s royal capital in 1432 after the King Ponhea Yat abandoned Angkor Thom in 1431, in part due to repeated attacks from the Siamese. Phnom Penh became the permanent seat of government and the capital of modern Cambodia in 1866. While seeking protection from the Siamese, in 1867 King Norodom I signed a treaty with France making the country a French protectorate. Cambodia was gradually incorporated into French Indochina and by 1897 the French stripped the Cambodian royal family of their power. The country was essentially a French colony until it was granted independence in 1953. 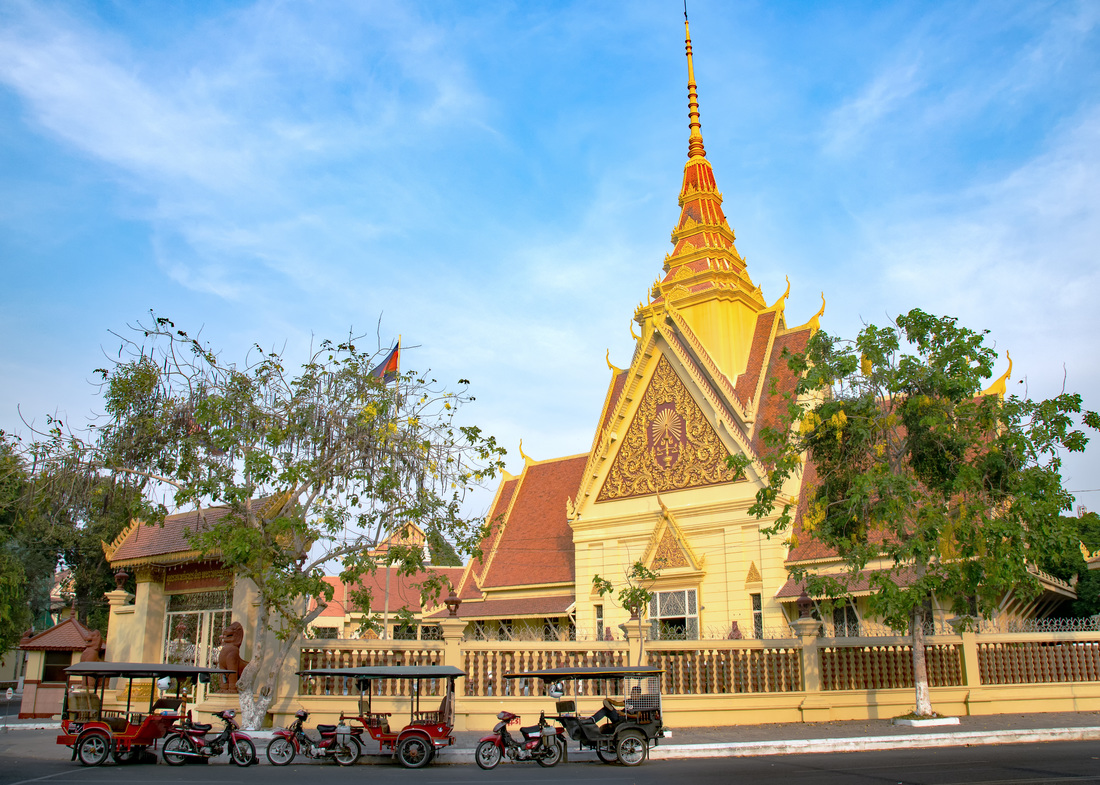 Traditional architecture, Phnom Penh Cambodia
Today Phnom Penh’s main tourist area lies along a stretch of the Tonle Sap River known as “River Side.” Preah Sisowath Quay is the name of the busy road that parallels the river, and in the neighborhoods that lie to the west, many buildings remain from the French colonial period. The congested streets are a mix of architectural styles; a blend of old and new, Asian and European. A number of the city’s most visited sites, including the Royal Palace and the National Museum, are within walking distance of Sisowath Quay.
Everyone traveling to Siem Reap from Phnom Penh should plan on seeing the National Museum for an introduction to Angkor Period art. The Palace is surrounded by parks, temples and government buildings constructed in the same unique Southeast Asian style as the Royal Palace. A visitor strolling around this lovely area can’t help thinking how similar it is to Bangkok.

A few blocks to the north of the National Museum, along Preah Ang Eng Street, is Kandal market. This chaotic area could be called the “real” Phnom Penh, often described as “rough around the edges” or “gritty”. The streets here are dirty, smelly and crowded, and have probably horrified many a faint-hearted westerner. Much of Phnom Penh has a slightly edgy feel to it, probably due to a combination of poorly-lit streets, badly-maintained infrastructure and inefficient garbage removal. However, the people here are just as nice and friendly as they can be. Cambodians live their lives out in the open; working, cooking, eating, bathing and laughing on the street in full view of their neighbors. No visit to Phnom Penh would be complete without wandering through one of the city’s market areas. 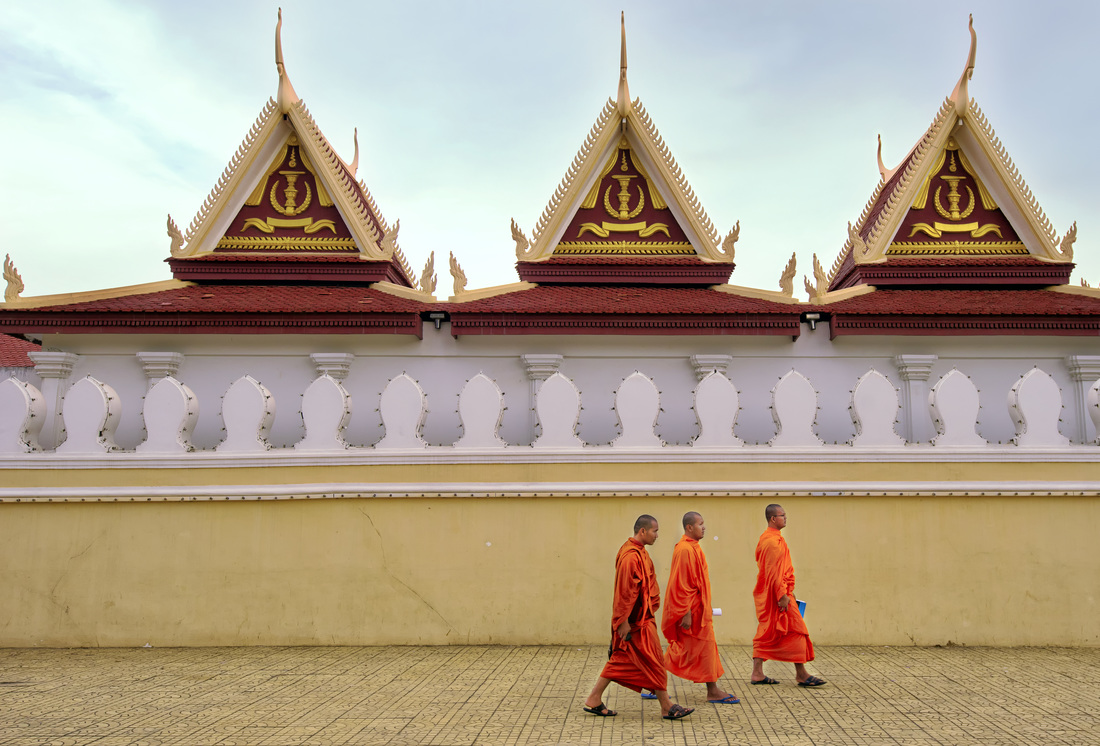 Monks stroll past the Royal Palace, Phnom Penh cambodia
​Sadly, throughout its long history, the tiny Kingdom of Cambodia has been involved in numerous armed conflicts with its neighbors. During the Vietnam War, Cambodian head of state Norodom Sihanouk made a nominal attempt to maintain the country’s neutrality. However, by the mid 1960’s both the People’s Army of North Vietnam (NVA) and the National Liberation Front (Viet Cong) were using bases in Cambodian territory to move troops, arms and supplies into South Vietnam. As early as 1965 the U.S. military began bombing rural Cambodia in an attempt to drive out the Vietnamese and their supply lines. Continuing until 1973, it is estimated that over 2.7 million tons of bombs were dropped, killing over 150,000 people. 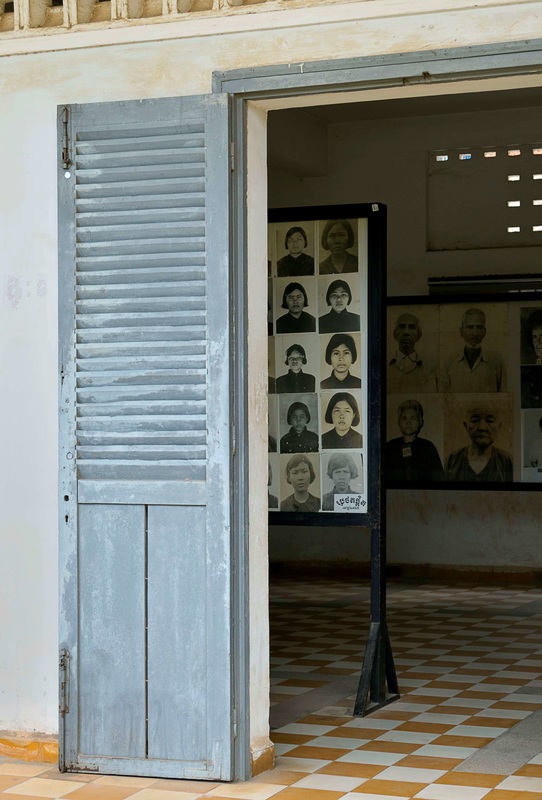 Tuol Sleng Genocide Museum, Phnom Penh Cambodia
Phnom Penh has several sobering monuments to the unfortunate souls who perished during the dark period under the Khmer Rouge. Tuol Sleng Genocide Museum, also know as S-21, is the site of a former high school which was used by the Khmer Rouge as a prison / interrogation center. It’s estimated that 17,000 to 20,000 political prisoners were held in the prison. No one is certain of the exact number of detainees; however it is generally agreed that only seven survived. Almost all of the prisoners were members of the Khmer Rouge with the exception of approximately 500 foreigners who, unfortunately, became entangled in the insanity of this horrible period.

Tuol Sleng was used principally as an interrogation center; generally prisoners were not intentionally killed at the former school. Detainees were tortured until they were willing to dictate and sign ridiculous confessions, most commonly implicating themselves as U.S. CIA operatives. After giving these false statements they were taken away to be killed at other locations. 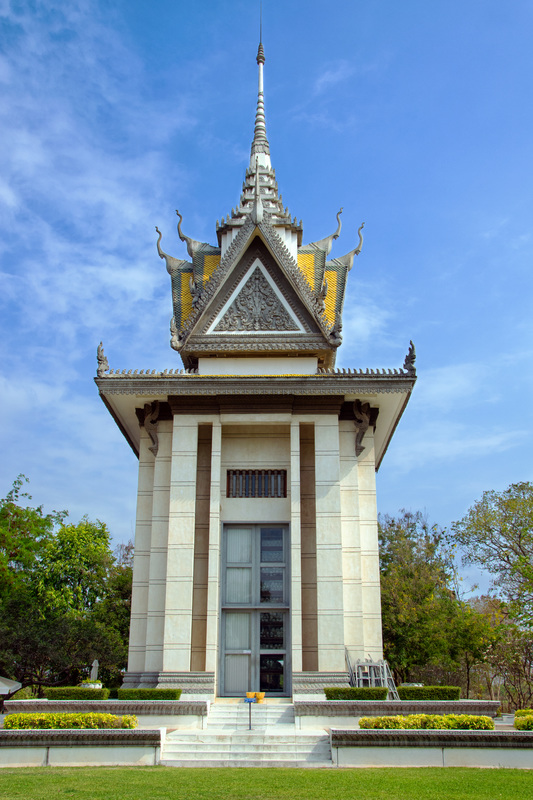 Memorial pagoda, Choeung Ek Killing Fields, Phnom Penh Cambodia
The Choeung Ek Killing Fields, made famous in the 1985 movie of the same name, is the site of a former orchard and Chinese cemetery used by the Khmer Rouge to execute and dispose of their victims. Over 8,800 people were killed and buried in a series of mass graves. Located 11 miles (17 km) from Phnom Penh, the site is now a memorial to the men, women and children who were brutally killed there.

Although these sites can be very depressing to say the least, one has to admire the survivors and applaud the people of Cambodia for having the courage to openly acknowledge their dark past. Foreign tourists are welcomed and encouraged to visit both these locations. In Phnom Penh tuk tuks can easily be arranged to make the round-trip journey for $15-$20 USD. 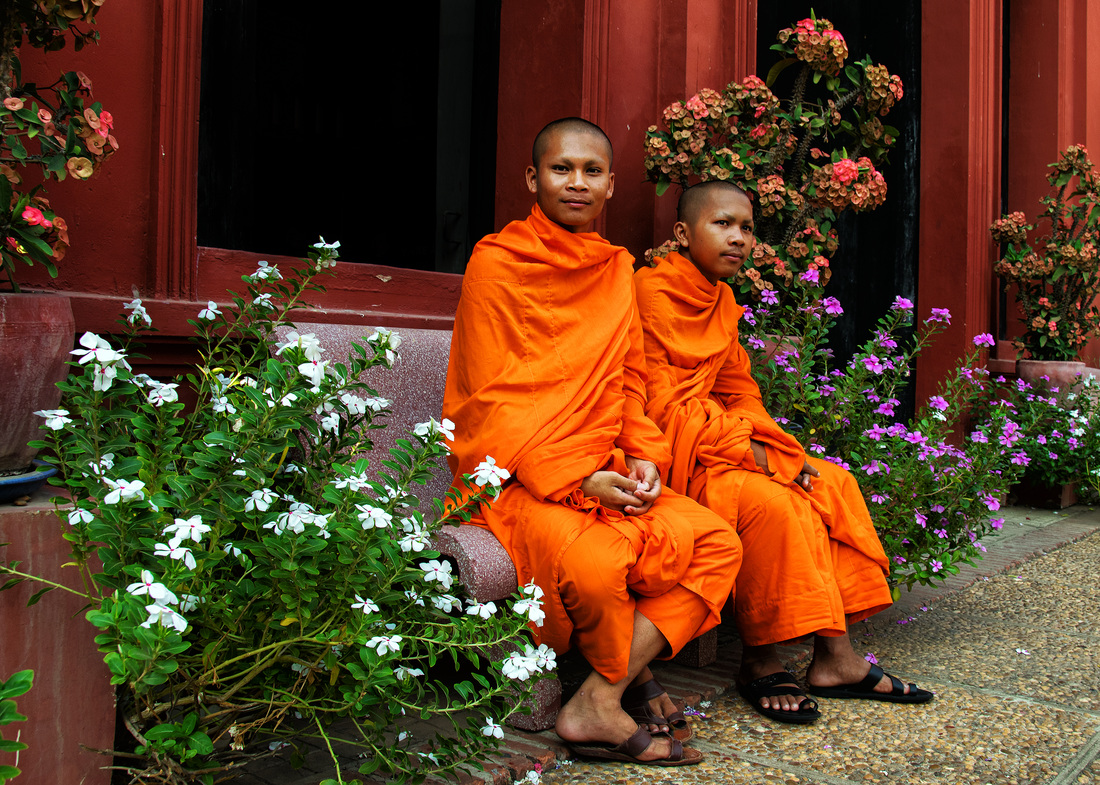 Buddhist Monks, Phnom Penh Cambodia
Most people will find that Phnom Penh’s attractions can be seen in two or three days. The capital city is Cambodia’s bus travel hub and after a few days of site-seeing visitors will move on to other destinations. Siem Reap, Sihanoukville, Kampot and Kep are just a few of the more popular places that are easily and inexpensively reached by bus.