The third largest city in Vietnam, Danang (Đà Nẵng) is well known for its beautiful beaches and popular tourist attractions such as Marble Mountain and the Museum of Cham Sculpture.  Perhaps the most famous beach in all of the country, My Khe, is located a mere ten-minute drive from Đà Nẵng International Airport. Known to many as China Beach, My Khe was once a major destination for U.S. servicemen (and women) on R&R during the Vietnam War. Years after the war, when Vietnam opened its doors to foreign visitors this pristine beach became a prime backpacker’s destination. Today, the twenty-mile stretch of My Khe is lined with hotels and luxury resorts with familiar brand names such as Hyatt and InterContinental.

Besides the beach resorts there are still many budget accommodation options near the beach and along Bạch Đằng Street on the west bank of the Hàn River just to the north of the famous Dragon Bridge. On this stretch of Bạch Đằng Street visitors will find numerous restaurants, cafes and bars which are extremely popular with both locals and visitors. 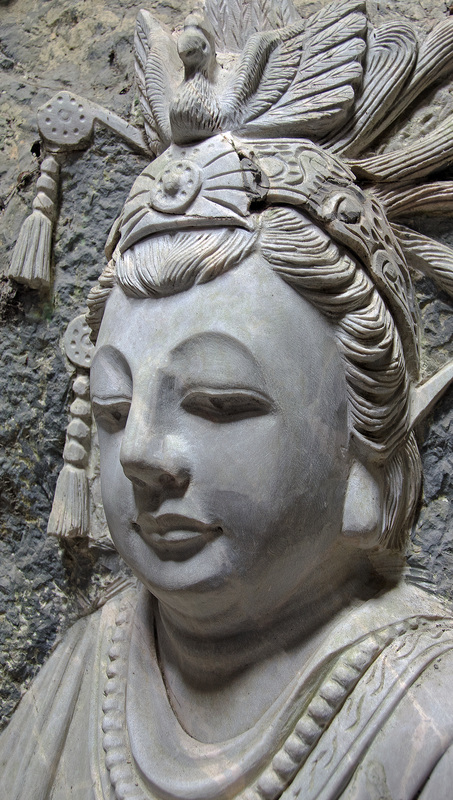 ​In addition to the airport, Danang is also conveniently located on Vietnam’s railway line which makes it an ideal stopover for travelers touring the country. It is also the closest transportation hub for visitors journeying to the charming and popular city of Hoi An. 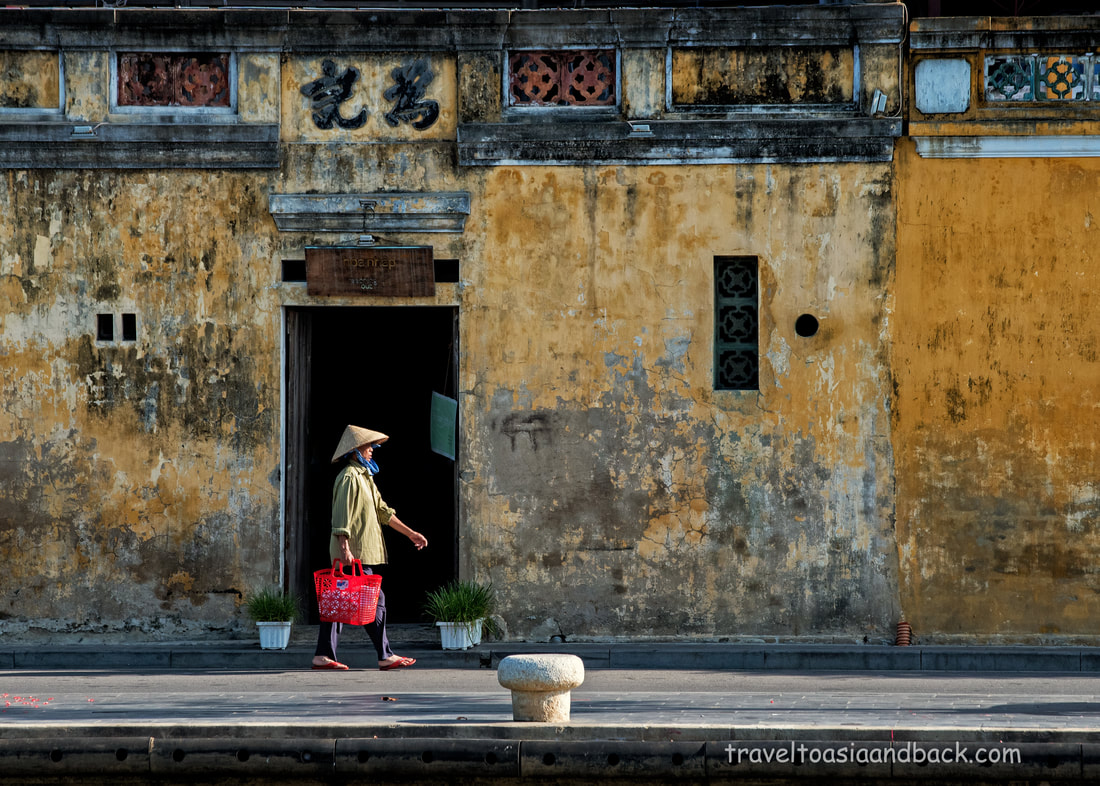 ​Situated on the Thu Bồn River, 18 miles (29 km) south of Da Nang is Hoi An an extremely popular destination for Vietnamese as well as foreign visitors. The “Old Town” portion of the city has been designated a UNESCO World Heritage site due to its long history as a trading port. This charming area, which consists of a mixture of Chinese shop houses and buildings from the French colonial period, has changed very little in the last 200 years. Although the Old Town area is very touristy, it is adjacent to a very authentic market area which caters more to locals than travelers. The people of Hoi An are extremely friendly and many are more than happy to pose for photographs providing, in the case of street vendors, that you make a purchase. The town provides perfect backgrounds to create wonderful pictures and it is very common to see photographers working with their models along the river front. 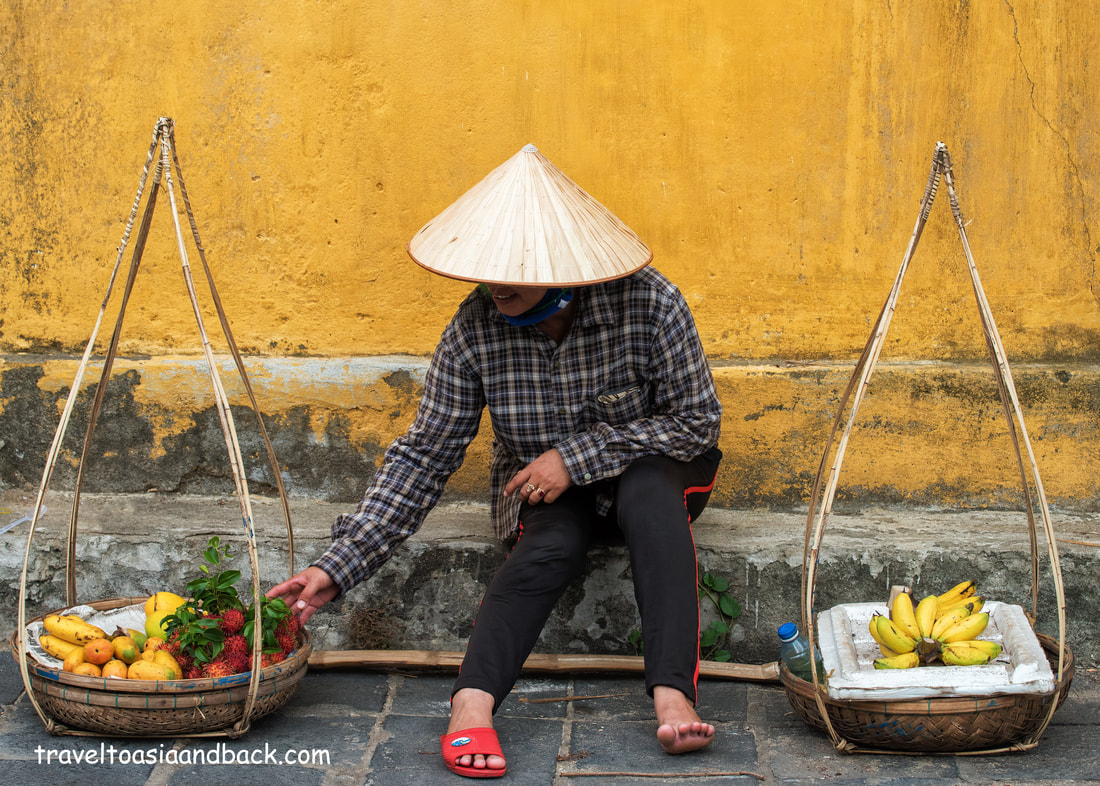 Travel to Hoi An

​Hoi An can be reached from Da Nang by hired car, taxi or public bus. The yellow-colored public bus number one makes the 18 mile (30 km) trip in roughly 45 minutes. The closest bus stop to the Da Nang Railway station is at 299 Lê Duẩn Street and is clearly visible on Google Maps.  Although the official bus fare is 17,000 VND, the bus attendants are famous for over charging tourists not only on the fare but may ask an additional fee for luggage. Most foreigners will end up paying 30,000-50,000 VND to make the trip. Although nobody likes to feel as if they are getting cheated, paying $2.27 USD to ride the public bus is still the cheapest way to get from Da Nang to Hoi An. 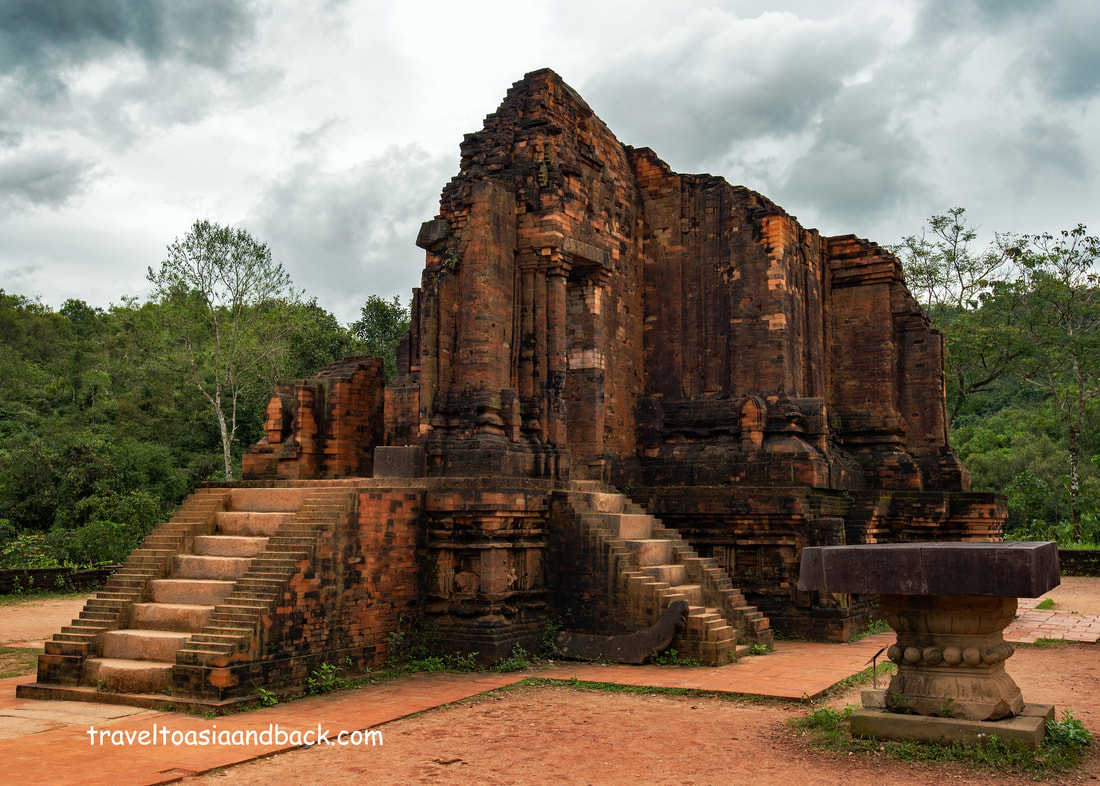 In addition to the Old Town, there are a number of popular attractions in the surrounding area. My Son (Mỹ Sơn) is the ruins of a number of temple complexes built by the Cham people between the fourth century B.C. and fourteenth century A.D. The Cham arrived in central Vietnam from Indonesia sometime in the third to fourth century B.C. The kingdom of Champa would eventually cover a large portion of present day Vietnam. They were contemporaries and rivals of the Khmer until 1203 when they were defeated in battle by King Jayavarman VII. The Kingdom of Champa was essentially annexed by the Khmer for the next 17 years. This UNESCO World Heritage site, is located 23 miles (37 km) from Hoi An and can be reached by taxi or private car in about one hour. A number of operators run bus tours to Mỹ Sơn, and although I am not a fan of organized tourism, the price is just too good to pass up. A round-trip tour bus ticket to the site can be purchased for 150,000 VND, less than $7 USD. 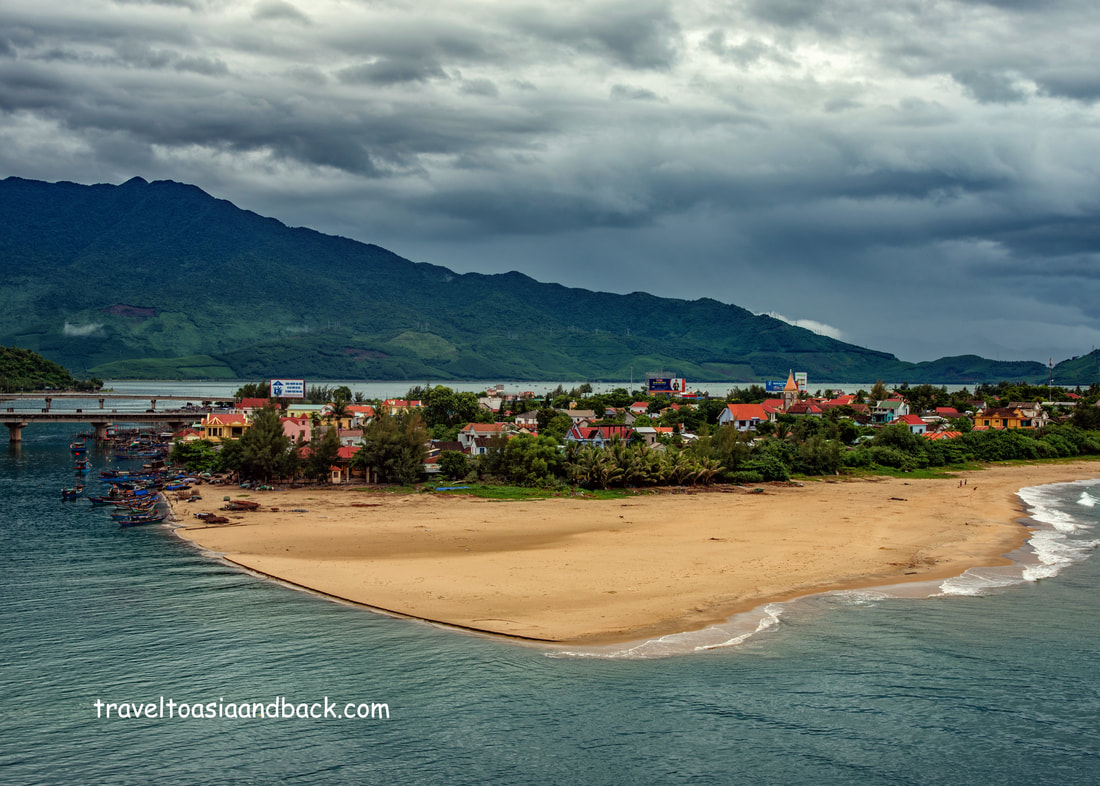 Located along side Highway QL1A, the small sea-side village of Lang Co (Lăng Cô) is known for its white sand beach and seafood restaurants. Situated on a narrow strip of land between Lang Co Lagoon and Lang Co Bay, it is a mandatory lunch stop on the popular and well traveled scenic route between Danang and Hue. 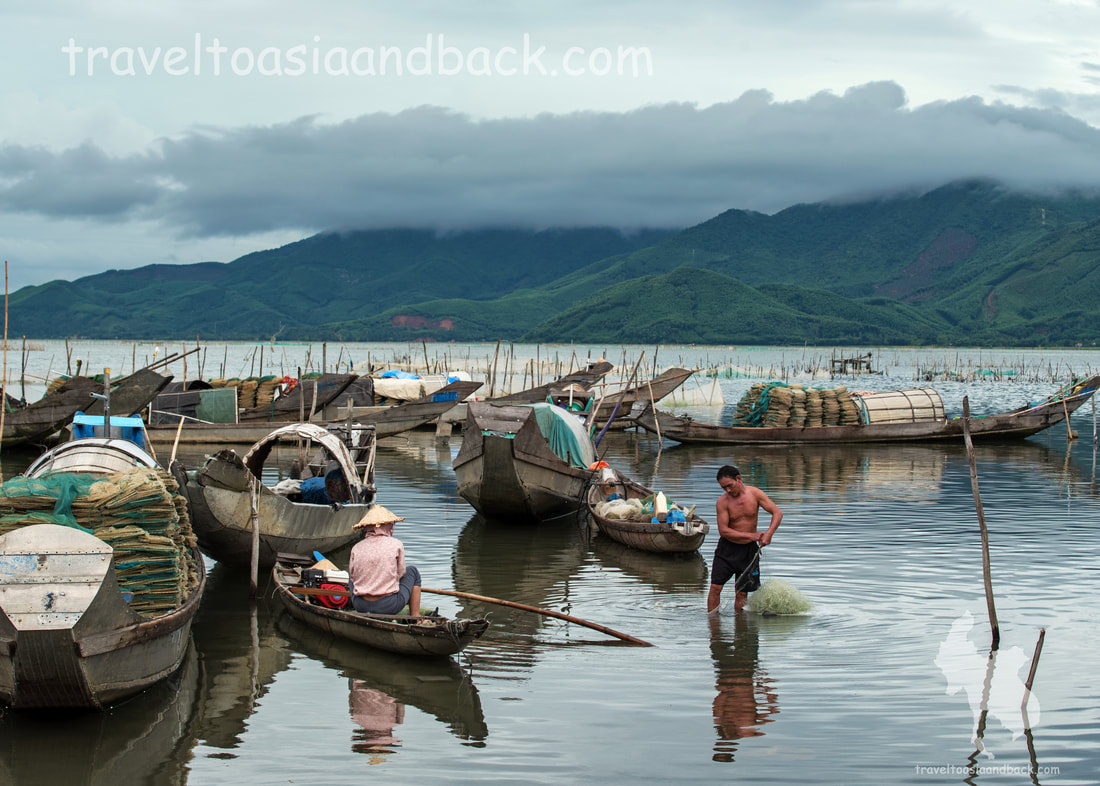 Located 55 kilometers north of Danang, Cau Hai (Cầu Hai) is one of the largest lagoons in Vietnam and covers an area of 52 square kilometers. Visiting the sleepy villages surrounding the lagoon is a great way to escape the hustle and bustle the more popular tourism destinations such as Hue, Danang and Hoi An. Exploring the shores of Cau Hai gives travelers the opportunity to experience a different side of Vietnam and glimpse into the everyday lives of villagers who both fish and farm to feed their families. 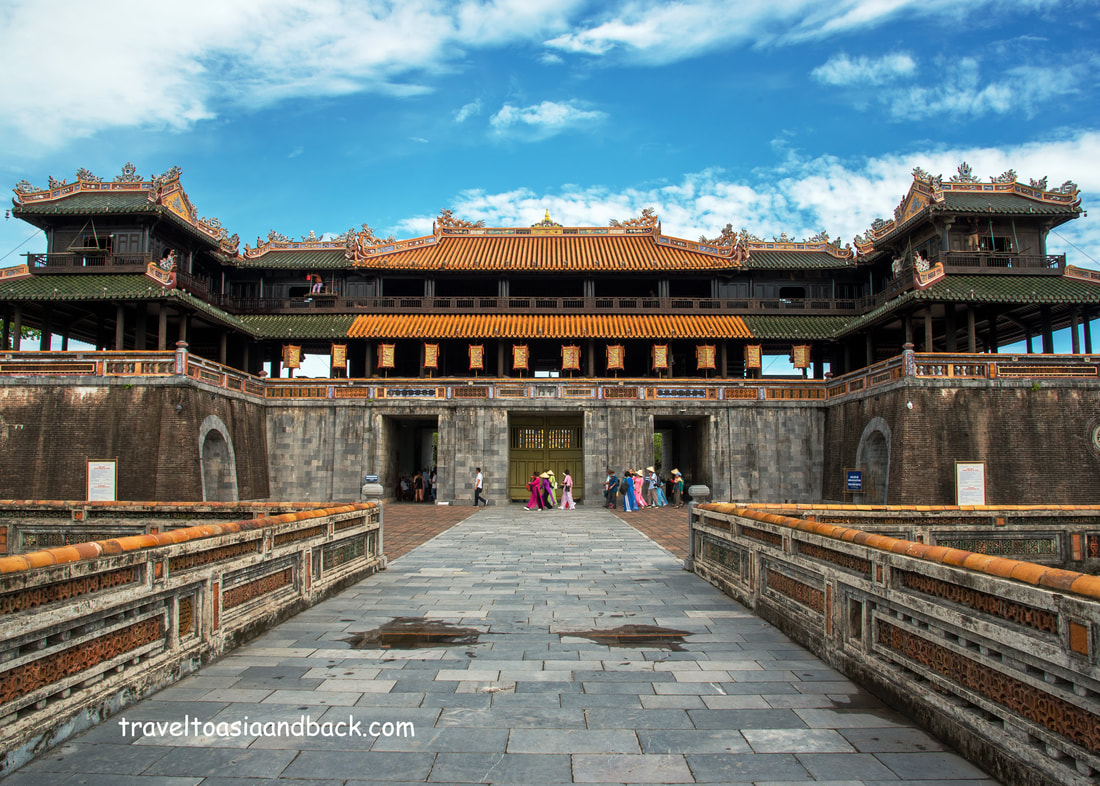 The historic city of Hue (Huế) is a must-see destination and is usually included on most travelers’ itineraries. This small city is located on the Perfume River, 64 miles (102 km) north of Danang ( Đà Nẵng), where it can be reached by train in roughly two and a half hours.

​In 1802 the feudal lord Nguyễn Phúc Ánh consolidated power and unified Vietnam. Phúc Ánh, who would later take the title Emperor Gia Long, made Huế Vietnam’s capital. Known as the “Imperial City”, Hue would remain Vietnam’s center of politics, religion and culture until 1945.

Under the direction of Emperor Gia Long, thousands of workers began constructing the famous citadel of Hue in 1804. The term citadel refers to the six miles (10 km) of high walls, ramparts and moats built as a fortress to protect the palaces within. At the center of the citadel is another series of walls surrounding an area known as the Forbidden Purple City. Like the Forbidden City in Beijing, this area would have been home to the Emperor, family and staff and strictly off limits to the common people.
Because of its proximity to the 17th parallel, the dividing line between North and South Vietnam, Hue was of great strategic importance to the North Vietnamese and their allies. On January 30, 1968 the North Vietnamese Army and Vietcong launched the military operation which would be known as the Tet Offensive. Tet, the Vietnamese lunar New Year, had traditionally been a time when both sides put down their weapons and returned home to be with their families. For the South Vietnamese troops Tet 1968 was not an exception and most soldiers left the cities to return to the villages. The North Vietnamese seized this opportunity and simultaneously attacked major cities and bases throughout South Vietnam.  Hue’s defenders were initially caught off guard, and the North Vietnamese easily overran the city. It would take over a month for U.S. and South Vietnamese forces to turn the tide and secure Hue, marking this as one the most deadly battles of the War.

Today the citadel, the remains of the royal palaces, temples, tombs and various associated structures make up the UNESCO World Heritage Site known as “The Complex of Hue Monuments”. Much of the site has been badly damaged and some parts are in ruins as a mostly as a result of war. Much of the fighting during the battle of Hue was fought in and around the citadel. However, restoration work has been completed on the major monuments so there is still plenty to see. 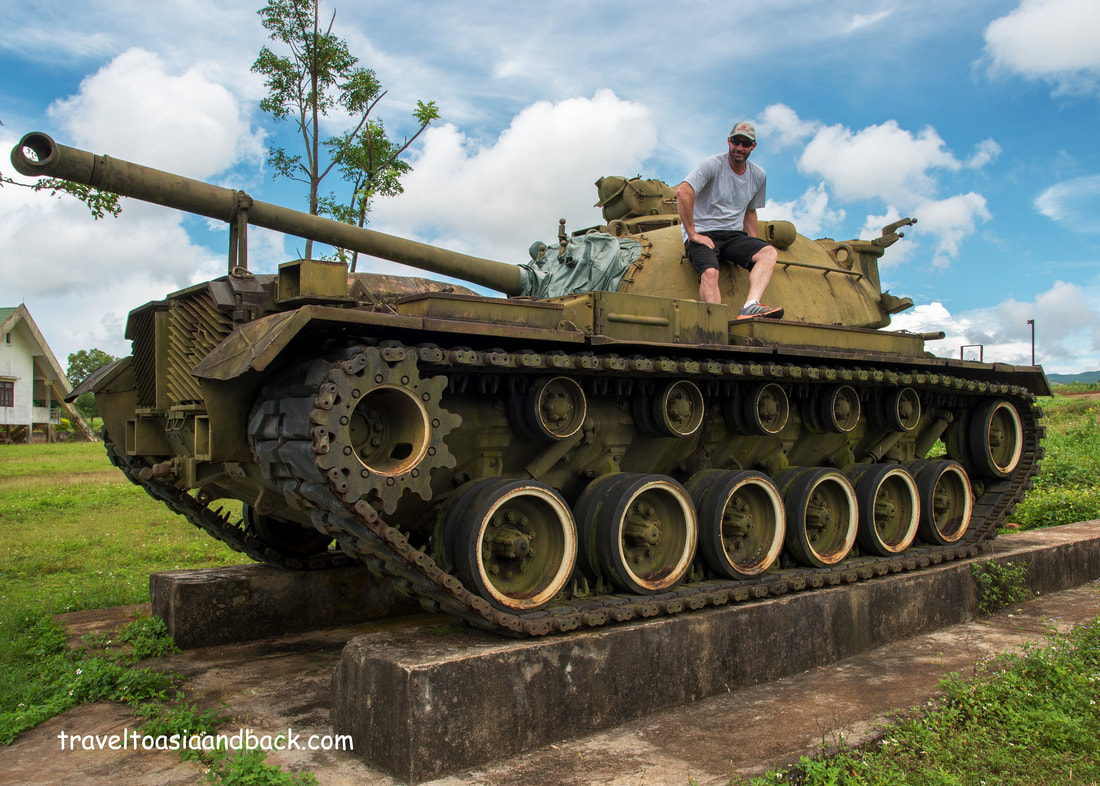 Travel  Dong Ha and the DMZ

On April 26 1954, the Geneva Conference commenced to decide the fate of the Korean peninsula and to end the hostilities in French Indochina. After the disastrous fall of the French base at Dien Bien Phu to the Viet Minh on May 7th 1954, France had little choice but to leave Southeast Asia. Vietnam was granted independence on June 4th, but negotiating France’s withdrawal would continue until July 21st when the Geneva Accords were finally agreed upon by The Democratic Republic of Vietnam (North Vietnam) France, China, The USSR and the United Kingdom.

The major consequence of this conference was the partitioning of Vietnam at the Ben Hai River which runs roughly along the 17th parallel. A swath of land approximately 3 miles (5 km) from either side of the river made up the Demilitarized Zone or DMZ for short. Originally the division of the country was to last for only two years to allow France to withdraw their troops and prepare for a national election to be held in 1956. The elections did not take place as South Vietnam’s president Ngô Đình Diệm refused to hold them and with the build-up of communist insurgents in the South, the divided nation was headed into a civil war.

As the U.S. became more involved in the conflict it built bases and observation posts along Highway 9 west of Dong Ha. One of the most famous and bloody battles of the Second Indochina war was fought over the U.S. Marine base at Khe Sanh. Located eight miles (13 km) from the border with Laos, the North Vietnamese began the attack on January 21 1968 just nine days prior to start of the Tet Offensive. The siege of Khe Sanh would continue until July 9th when the Marines, with the help of massive air and artillery support were finally able to beat back the North Vietnamese. 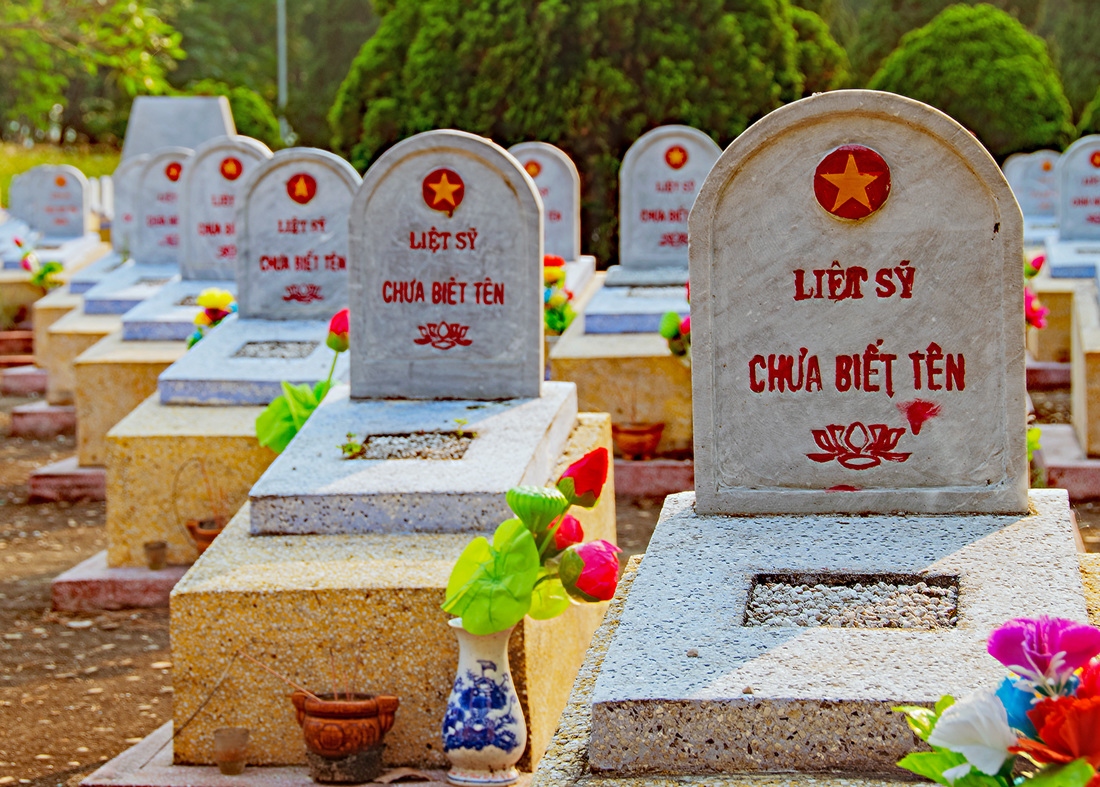 traveltoasiaandback.com - Unknown soldiers, Truong Son National Cemetery, Quảng Trị Province, Vietnam
Today the area along Highway 9 known as the DMZ is visited by travelers from around the globe. Khe Sanh has become a memorial with a museum and a replica bunker complex at the end of the base’s original air strip. The area’s other wartime sites include the Vinh Moc Tunnels where the inhabitants of a rural village lived underground for a period of over two years and the Truong Son National Cemetery where 10,000 NVA and Viet Cong soldiers are said to be buried. The area can be toured independently from Dong Ha but many travelers opt to visit the DMZ from Hue as part of a group tour. These tours can be arranged by hotels or travel agents and are generally very reasonably priced. Be advised that any tour from Hue will be a full day and will involve a lot of driving with rather quick stops at each site. Anyone who has a strong interest in the war’s history and really wants to explore the DMZ should consider hiring a private car, driver and guide.