​Sharing a border with Myanmar’s Kayin State to the north, Mon State to the northwest, and Tanintharyi Region to the west, Kanchanaburi Province, located approximately 126 kilometers (78 mi) west of Bangkok, is best known for the Bridge over the River Kwai and the infamous Thailand–Burma Railway, known as the death railway. It is a well-known destination for WWII history buffs and folks from Commonwealth nations who come to Kanchanaburi to honor the unfortunate souls who perished and are interred so far from their native soil. 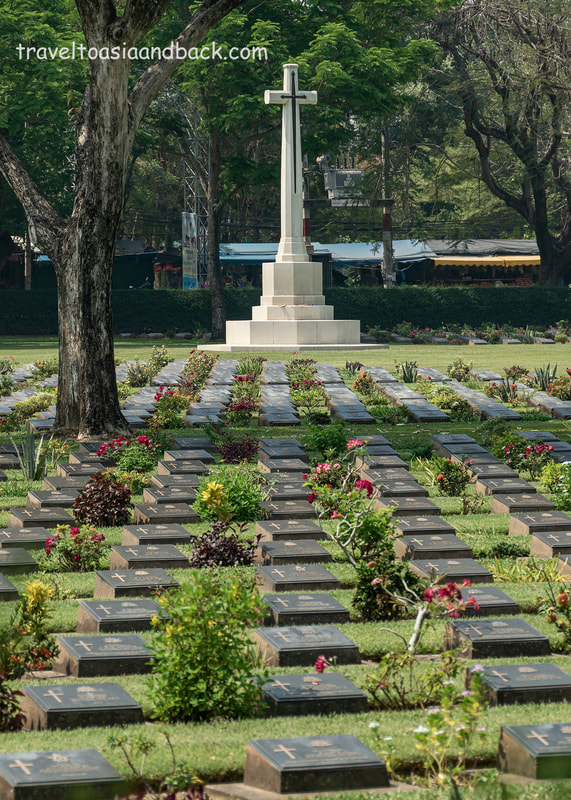 ​During the World War II Japanese occupation of Thailand, a 258-mile (415 km) section of railway was constructed to connect existing lines in Thailand and Burma. This allowed the Japanese to move troops and material from Singapore, up through the Malay Peninsula, into Thailand and on to Burma for an eventual attack on India. Approximately 60,000 Allied POWs and 250,000 Asian Laborers were involved in the project which started June 1942 and was completed in October 1943. It has been estimated that 16,000 American, Australian, British and Dutch POWs and 90,000 Asian Laborers died during construction. Conditions on the work sites were brutal, thousands of men died from malnutrition, disease and exhaustion. Many more were executed or beaten to death by their Japanese and Korean guards. Ironically, after surviving Allied bombing, the British later removed the Thai section of the railway between Nam Tok and Burma. 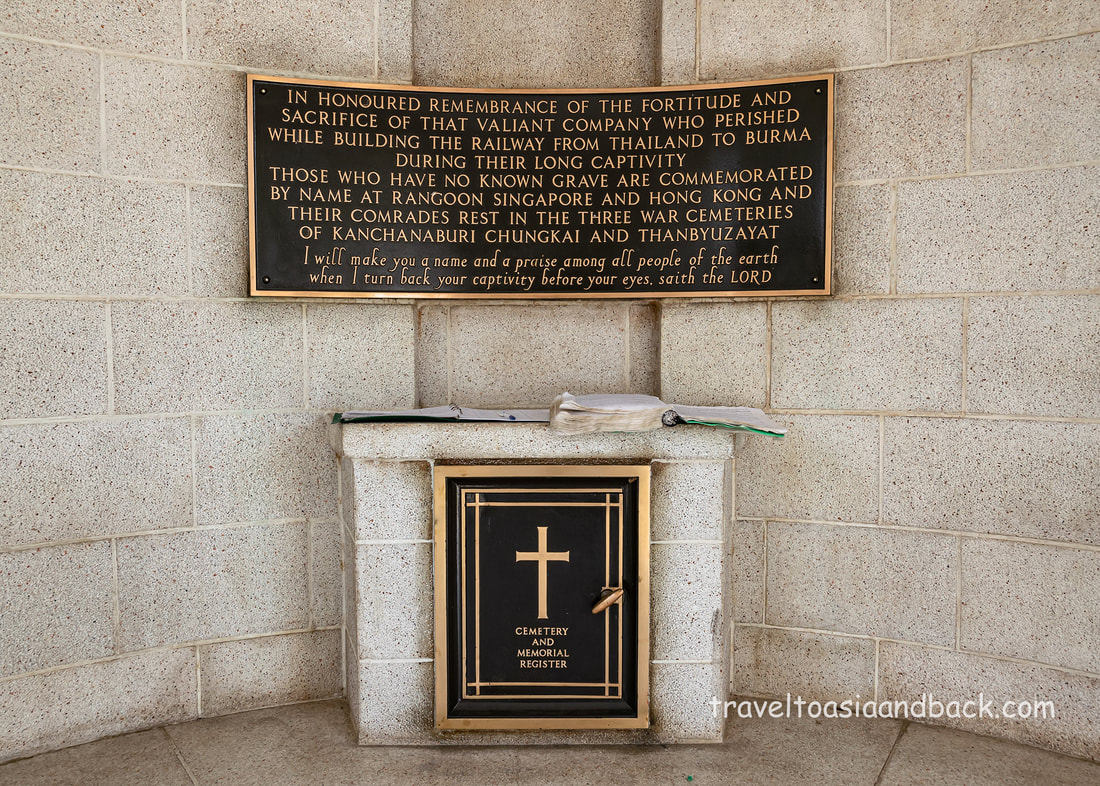 A fantastic way to learn about the railway's history and the men who died building it is a visit to the Thailand – Burma Railway Centre, also known as the Death Railway Museum. Located on Chao Khun Nen Road, 280 meters from Kanchanaburi Railway station, this impressive museum overlooks the Kanchanaburi War Cemetery known by the locals as Don Rak. The cemetery is the final resting place for 6,982 POWs who perished building the railroad. 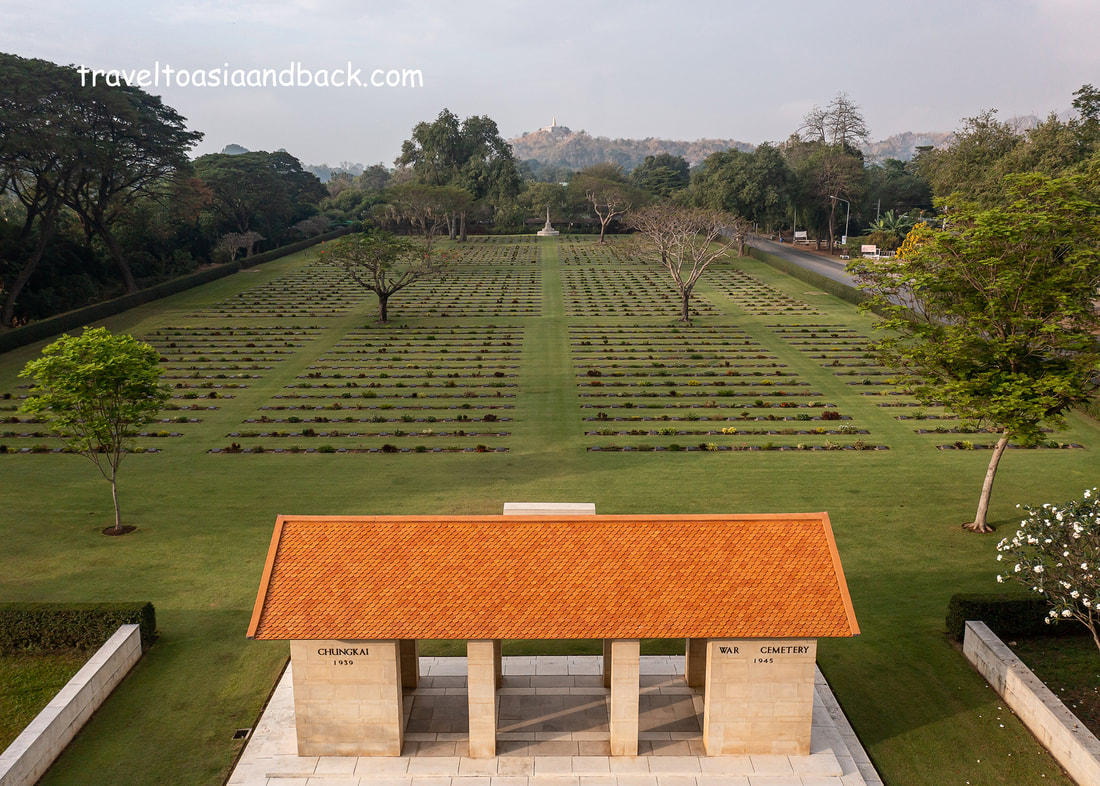 A second war cemetery is located along the banks of the River Kwai (Khwae Noi) 900 meters from Khao Pun Railway Station. Chung Kai War Cemetery contains the graves of 1,739 men and was one of the many POW base camps located along the railway. This cemetery was actually started by the prisoners themselves who also built a hospital and church. Most of the men interred here were working on a section of the railway known as the Chungkai cutting and died in the hospital they built. Located 600 meters to the southwest of Khao Pun Railway Station this section of the line is still in use but has been widened to accommodate modern-day rolling stock. 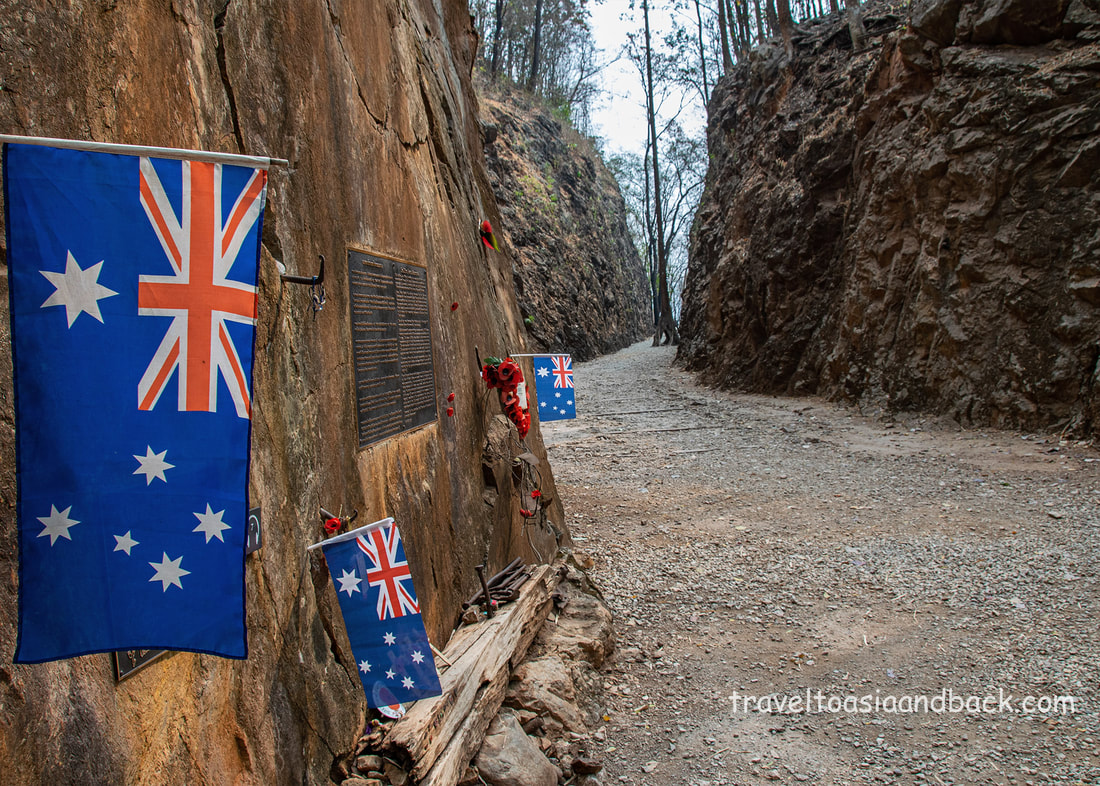 The scenic train ride up to Nam Tok takes just over two hours and is a must, particularly for travelers that arrive in the area by car or bus. There are several points of interest along this section of the line including Wat Tham Khao Pun, Krasae Caves and the Wang Pho viaduct. One mile (1.6 km) north of from Nam Tok station is Sai Yok park and Sai Noi Waterfall which is a very popular tourist destination.

By far the most impressive site in this area is the Hellfire Pass Memorial Museum. Originally named the Konyu Cutting, Hellfire Pass was an extremely difficult section of the railway to build as it required clearing dense forest and earth before making “cuttings” through solid rock. These cuttings were made using hand tools and dynamite, the blasted rock and debris removed from work site manually. In an effort to complete the railway as quickly as possible, the Japanese began working crews 24 hours per day. Working through night by torch light in horrific conditions, it was said that the scene was reminiscent of Dante’s Inferno. Hellfire Pass is the name given to this cutting by the POWs during this “Speedo” period when a particularly high number of POWs and impressed Asian workers perished.

Located 13 miles (20 km) up Route 323 from Nam Tok station, the transit time to Hellfire Pass is 20 minutes. There are several options to get there from Kanchanaburi including hiring a taxi, joining an organized group tour, or utilizing various combinations of trains, buses and taxis. If you have not previously made the train trip up to the north, catch the early train, number 485, departing at 06:07 AM. The trains often run late, taking the 10:35 AM train is not recommended. Foreigners pay 100 baht to board the train no matter which station is the final destination. Upon arriving at Nam Tok station taxis (Songthaew) will be on hand and provide transportation the rest of the way for 500 THB one way, 800 THB return. A cheaper option is to take a Moto taxi which can be found by walking up the road from the station.

The red colored Thai government bus number 8203 runs from Kanchanaburi bus station to Sangkhlaburi, passing in front of Sai Yok National Park and continuing up route 323. This bus will stop directly in front of the entrance to Hellfire Pass. These buses depart Kanchanaburi every hour starting at 07:30. The hour and a half trip costs 50 baht, just over $1 USD. Boarding the bus at the station is recommended rather than trying to flag it down on the road. On the return trip, the last bus passes by Hellfire Pass around 04:20 PM and 04:40 PM at Sai Yok. 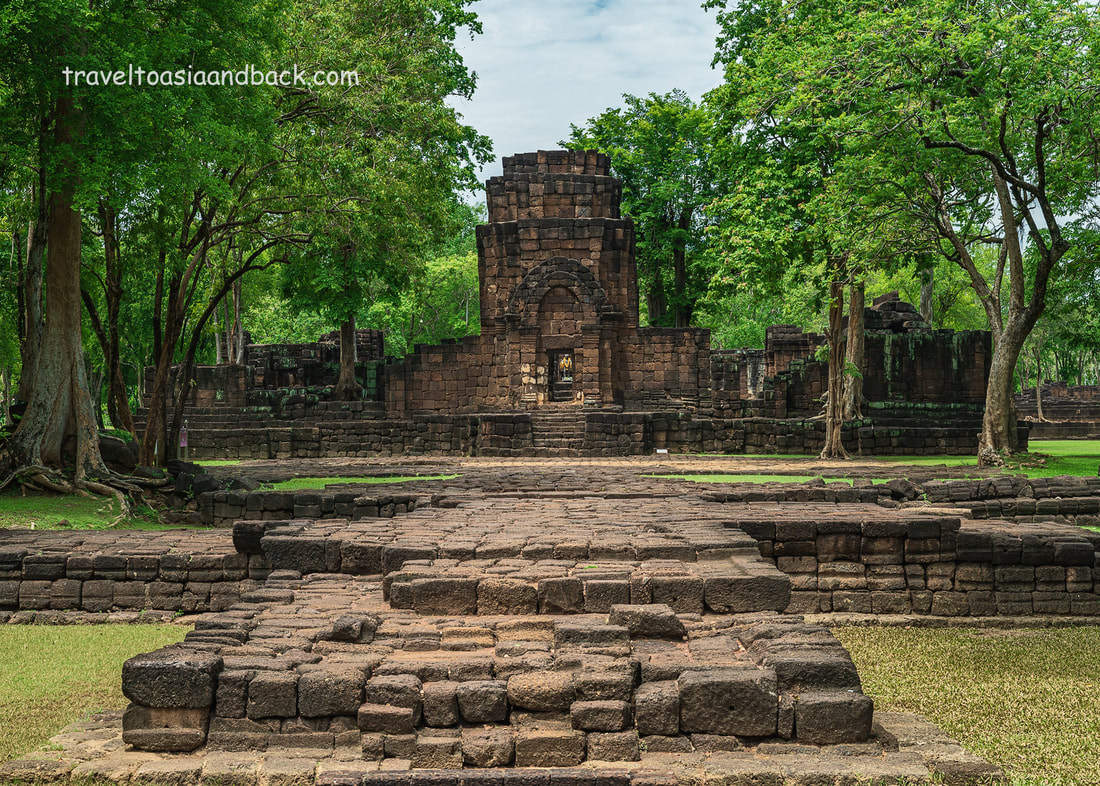 Situated along the banks of the River Kwai (Khwae Noi), approximately 40 kilometers (25 mi) from Kanchanaburi Railway station is the ancient ruins of Prasat Muang Sing. Covering one square kilometer, the site was constructed during the reign of King Jayavarman VII, who ruled the Khmer Empire between 1181-1218 A.D.

Jayavarman VII is considered to be the most powerful of all the Khmer Kings and was a patron of Mahayana Buddhism. In addition to building magnificent temples, a series of rest-houses and hospitals were constructed to aid weary travelers on their long journeys from the famous city-state of Angkor to the kingdom’s far western territories in present-day Thailand.

Constructed in the “Banyon-style”, Prasat Muang Sing, like many of the ancient sites on the ancient Khmer Highway is rather small when compared to the ruins of Angkor Wat or Angkor Thom but for those who have never journeyed to Cambodia, this site offers an excellent introduction to the spectacular architecture of the Khmer empire. 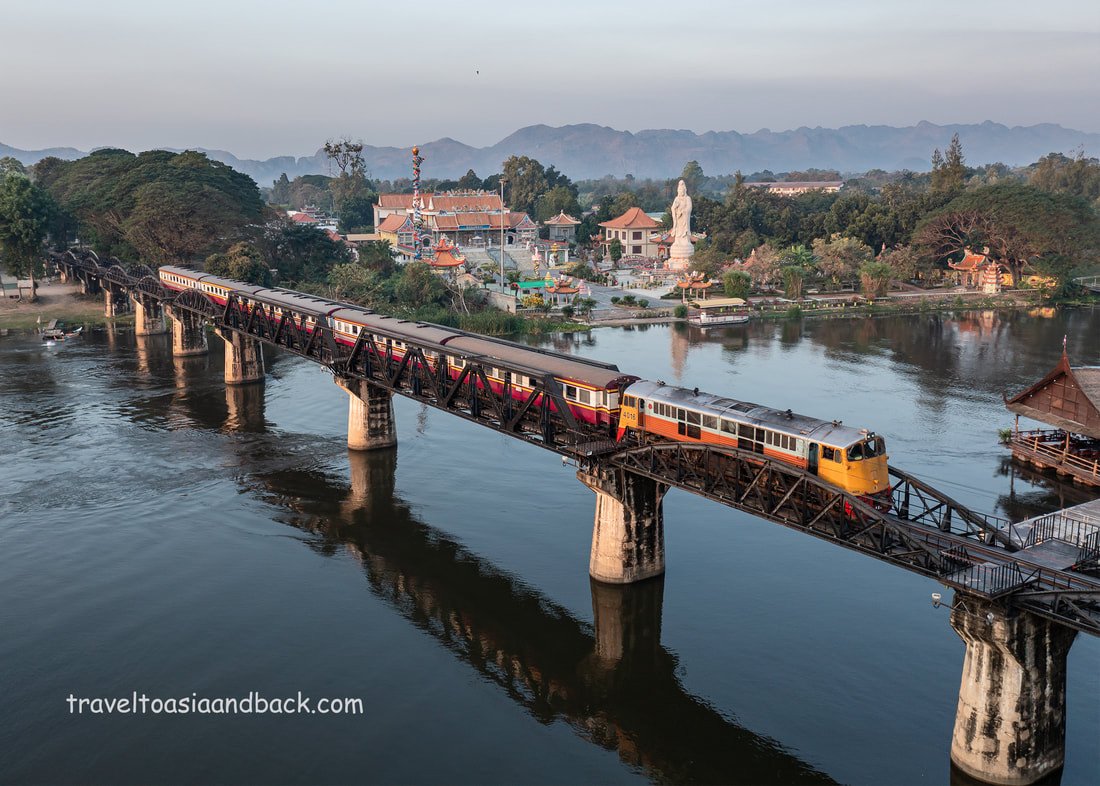 Many Bangkok travel agencies offer one day bus tours to Kanchanaburi to visit the bridge and a few other sites along the way. However, one day is really not enough time to see the many sites in the area. With easy access from Bangkok and many budget accommodations to choose from, Kanchanaburi is a great place to stay for a few days or even a week. Transit time by road takes approximately two hours with buses departing from both the northern (Mo chit) and southern bus (Sai Tai Mai) terminal at a cost 110 THB or about $3 USD. Tourist mini vans can be found on Khoa San Road for around the same price.
Another transportation option from Bangkok is to take the train from Thornburi railway station located on the west side of the Chao Phraya River. Trains depart the station twice daily, at 07:50 AM and 13:55 PM. The two-and-a-half hour trip costs 100 THB, less than $3 USD. There are no reserved seats, the train is considered to be third class with tickets only sold at the time of departure. It should be noted that the train is often delayed, expect to arrive later than the scheduled time. The trains biggest down side is that it is not air conditioned and during the dry season it is an extremely hot and dusty ride.
After arriving in Kanchanaburi the train continues on in a northerly direction towards the end of the line at Nam Tok. The station immediately after Kanchanaburi is named River Kwai Bridge and caters mostly to tourists. Many people will board the north bound train here to ride across the famous bridge which is just on the other side of the station. The main guest house area is about a fifteen-minute walk from this very touristy area.